Home > French-American Relations > The Legion of Honor for US veterans > Portrait of a hero > Sergeant Ivy C. Agee Jr 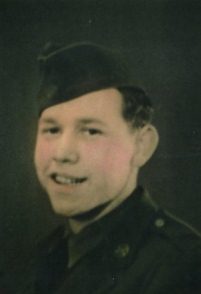 Sergeant Ivy C. Agee Jr. has lived in Gordonsville, Tennessee since his birth in 1923. He met his future wife, Virginia while they were school—she was a year behind him—and the two were married before he went off to war.

“One of the hardest things I’ve ever done was to leave her, to go off to war without knowing what would happen,” said Agee over the phone. 71 years later, his wife was still at his side, facilitating the phone conversation, interpreting questions, and prompting the answers she knew he would want to share.

Sergeant Ivy Agee Jr. entered into active service in the U.S. Army on January 17th 1943 and did basic training at Fort Oglethorpe in Georgia and Fort Still, in Oregon before being sent to the European Theatre Operations on May 27th 1943 with the 111th Field Artillery Battalion of the 29th Infantry Division

Temporarily attached to the 116th infantry regiment, he was among the first assault wave that landed on Obama Beach on June 6, 1944. Responsible for communications, he was assigned to a jeep equipped with a radio which he was forced to abandon to avoid heavy fire.

“I had to crawl over two dead American soldiers to get to the wall for protection,” Agee shared.

“Yours was the only craft that got off the beach,” his wife reminded him before proceeding to clarify the sequence of events.

“I wasn’t on the beach five minutes. I stayed in a row that went down to the beach from a hill where there was a sand table and gun positions,” he continued. “They left so quick that they didn’t have time to destroy the sand table. That helped us more than anything.”

After 3 days of combats, he joined 111th Field Artillery and went on to fight in the Northeast of France, in the Ardennes. Although he didn’t have time to write to his wife, since he was always on the move, she wrote to him every day, until he returned safely home in 1945.

“They were very gracious,” Agee recalled of the French people he met. “When the war was over, I was on patrol in a certain area to investigate. There were a lot of houses with branches in front of the houses. A [French] woman showed me was a cement place to keep guns, knives. She let me have some... I really liked that [because] I only had one weapon.” 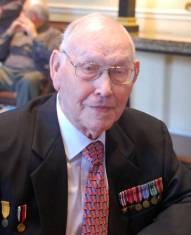 Since the war, Agee has returned to France four times, making sure to visit the grave of his best friend who was hit by a piece of shrapnel after the war was over.

“It means a lot to me,” he shared of the 70th anniversary commemorations of D-Day. “A lot of people don’t know what D-Day was.”

Beyond his wife, who seems to carry the memories of the war as much as he does, Agee has never shared much with his 4 grandchildren, or 3 great-grandchildren.

“I want to keep it to myself,” he said. “I don’t figure myself a hero. It’s the ones who didn’t come home who were the heroes.”