Home > French-American Relations > The Legion of Honor for US veterans > Portrait of a hero > Seaman First Class Curtis D. Fleming

Curtis D. Fleming was born in Virginia in 1924.

Having never given much thought to the war beforehand, he enlisted in the footsteps of his older brother, who went in about 6-8 months ahead of him. On November 18, 1942, at the age of 18, he entered into active service and went through a lot of training.

“When we got to England, we were operating small boats and learning to guide the boats in,” described Fleming of his pre-Normandy invasion.

Attached to the 6th Naval Beach Battalion, his mission was to transport men and material during the invasion and then control traffic over Omaha Beach.

“We had trouble getting in,” he recalled. “The boat that took me in took a lot of hits. We had to unload into smaller boats so we could get in.”

As seaman first class, Fleming was responsible for helping to keep the lanes open.

Hit with shrapnel to the leg and back, he was evacuated to a hospital in England, where he remained for 4 months and 21 days. He never returned to the beach. 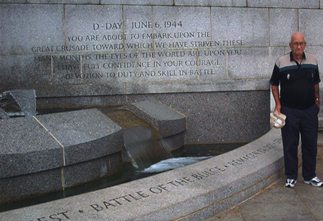 Six months after his discharge on February 12, 1946, Fleming joined the Army, then the Air Force. Altogether his military career spanned almost 22 years.

In 1956, he married a girl from England. They went on to have 1 daughter, 2 grand-daughters, and 4 grandchildren.

On the 70th anniversary of D-Day, Fleming will be one of 8 veterans from South Carolina to receive the French Legion of Honor.

When asked what the 70th anniversary means to him, he replied, “It means time has flown by. It doesn’t seem that long ago.”