Home > French-American Relations > The Legion of Honor for US veterans > Portrait of a hero > Technician 5th Grade Morton B. Waitzman

Dr. Morton B Waitzman has been back to France twice since first setting foot on French soil on June 6, 1944. But it was not until the 50th anniversary D-Day tour in Europe that this professor emeritus and former director of ophthalmology at Emory University realized that his silence fed into the delusions of Holocaust naysayers. So after fifty years of keeping to himself the painful memories that haunted him, he began to share them with his loved ones and the world.

“After Pearl Harbor, which I remember vividly… I was real anxious to get involved, but I was too young at that point, so I had to wait about a year. So that was January 1943,” said the Chicago native during his meeting with us at his Atlanta home, where he has lived for over 50 years. “I would have been drafted, but I was so gung-ho that I enlisted. Being a member of the Jewish faith, we had been hearing stories at that time about things that were happening to the Jews of Europe. We didn’t have the details, but I did know it was an awful thing going on.”

Waitzman spent about a year training in combat communications, becoming a Morse Code expert, which he still knows to this day. He was also fluent in French, having taken four years in high school and studying a lot on his own.

“I was actually asked by the military…You have the choice to go off to officer candidate’s school in engineering or to go off to Europe. Of course, that was an easy choice for me because I knew nothing about engineering, but I knew that going to Europe was my first choice.” At the end of December 1943, he shipped off to London, where as a radio operator, he was responsible for intercepting German messages sent by Morse code and maintaining contact with the French resistance, particularly the FFI, the Forces françaises de l’intérieur.

“I was in communication with them by code because, in the very early stages we wanted to know about the Germans.”

With D-Day rapidly approaching, the men didn’t know when or where it was going to be.

“Finally we were sent to the embarkation points near Plymouth, England, where I boarded ship, early June of ‘44 and I was on the mother ship and June 6 ‘44, climbing down the cargo nets about 4 o’clock in the morning. And uh, stormy weather. It was cold. Seasick. Miserable. And I had a radio on my back, an M-1 rifle, hand grenades, ammunition. So I was both combat communications and infantryman.

“A lot of us didn’t make that jump from the cargo nets to the infantry landing crafts... I obviously succeeded in the jump and finally I got the shores of Omaha Beach, Normandy on June 6, 1944, about 5:30 in the morning. And assigned to us, to the combat communications people especially, were some combat engineers who were to facilitate out getting through the German entrenchments on the beach and booby-traps.”

Waitzman had three missions: to get to the seawall as quickly as possible, to let the Navy know that their shells were falling too short or too long, and to get in touch with the FFI by voice. “The goal [of the Navy] was to make holes on the beaches for safety for our troops to get to the seawall, but that didn’t happen very often…It didn’t work out so fine for so many thousands of our… I lost too many comrades at that beach... It was a difficult time… to this day…” his voice waivered as emotions came up, only to be diverted by the dings of his iPhone.

“We got to the beach near the area of Colleville, and then our goal that first night, if you survived that long, was to get to the hills past Omaha beach and turn in for the first night… The rest is history, fighting along the hedgerows and finally getting to Saint Lo.

“You learn about D-day and that was 70 years ago. It was a long time ago, but it was like yesterday to me.”

Waitzman in Paris after the liberation

Waitzman went on to participate in the fierce battle of St. Lo, before getting transferred from the 115th Infantry Regiment to the French army commanded by General LECLERC, which participated in the liberation of Paris.

As he met the welcoming crowds throwing flowers, he recalls having to fight of the ladies offering kisses. “We’re here liberating Paris. How wonderful can that be?”

They were there only a couple days before moving on. Upon return to the 115th Infantry Regiment, Waitzman took part in the Battle of Ardennes.

“While I was there I kept thinking I had to get out of this thing and get to school so I could do what I need to do. It was so important for me to survive to be able to go to school and do something useful with my life besides killing.”

Crossing the Rhine on into Germany, Waitzman and his unit helped liberate the work and concentration camp, Dora Mittelbau. “These stories are difficult to shake out of our minds. I still don’t get away from them at night,” he shared, evoking the atrocities he saw in the camps. 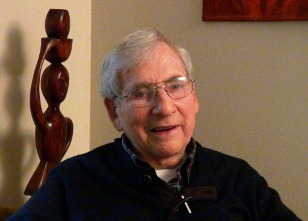 At the end of the war, he went to school just as he’d always wanted to do. He married his wife of almost 65-years, Aviva, and went on to lead a brilliant research career as his family grew from three children to four grandchildren and one great-grandchild. At the 60th Anniversary of D-Day, he took some of them with him to France to share the experience.

“I can’t tell you how much warmth and sympathy we felt from the people, especially in Normandy. They tried to share what they could and it was a meaningful experience. Their warmth was so palpable,” recalled the 90-year-old veteran, who looks twenty years younger.

His wife, Aviva, who sat nearby listening to the interview and making several trips into the back room to bring supporting documents to her husband’s account added, “To this day our feeling of warmth for Normandy is so positive.”

Waitzman beamed at his wife, his light eyes glowing with life and energy as he reflected on the last 70 years.

“I have so much: my family, my research, what I’ve been able to contribute. I’ve had so much, been able to do so much.”