Staff Sergeant Dewitt “Lucky” Wells was the third in his family to go off to war. His brother was in the marines, his sister was in the navy, and since he was in school, he didn’t pay much attention, until graduation day and his draft number came along in 1943.

“I figured I’d better go, unless I wanted to go to jail,” said the warm and talkative veteran.

After completing basic training in the US, he joined the 359th Regiment of the 90th infantry division in May 1944. Looking back on D-Day, Wells described his cluelessness about the war.

“What does D-Day mean, anyway?” he asked. “They said we were going in on June 6, but we didn’t know what that meant. At 19, I didn’t realize... I didn’t know anything about war was until I was there.”

Attached to the 4th Division for the Allied invasion, Wells’ regiments was one of the first to land on Utah Beach, where he was suddenly confronted with the harsh realities and had to learn fast. “Keep your head down. Don’t look behind. Look ahead” was his motto.

What stand out most in Wells’ memories of France are the hedgerows, which, as he recalled, made up 80% of the French landscape.

“I’m always amazed by what they called the hedgerows,” he shared. “I don’t know how they ever built them. From Normandy on, there were just hedgerows. All of our fighting was from hedgerow to hedgerow.”

About 20- 30 miles after he left the beaches, Wells finally came face to face with the people that he was there to rescue. He still vividly remembers the first French person he met.

“There was a little lady with grey hair who came out with a little boy. We shook hands. She hugged me. She was elderly, but so happy to see our side come in. The other side were hard people, from what I understood. She kept making movements with her hands to tell me so.”

Wells participated in some extremely violent battles to liberate the cities of Picauville, Cauquigny and Pont l’Abbé.

“The city fighting was the hardest. You can’t see who’s shooting at you or where it’s coming from.”

In fact, the 90th Infantry Division fought in some of the bloodiest combats of the Normandy Campaign before heading to Fontainebleau in order to secure the Seine. It fought to liberate the cities of Reims, Thionville and Metz in the East of France and was often met with strong enemy resistance.

He returned to the U.S. and in 1947, he married the love of his life, previously off limits because she was the principal’s daughter. Dancing to the “Sentimental Journey” through the 1940s, they went on to have three children and eventually moved to North Carolina from New York in 1971, where Wells worked for Caterpillar over the next 20 years.

At almost 90 years of age, Wells still keeps busy, working for his son, who does tree work.

“He lets me do all the tree stumps. So long as he keeps me busy, I’m happy.” 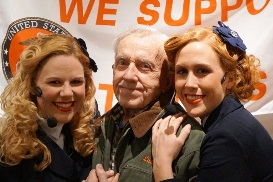 Wells and the Letters from Home Singers. Photo courtesy of lettersfromhomesingers.com

In fact, he just finished his first cornhole platforms that he built and painted “Carolina Blue”, which could very well be his next career step, as his son suggested. That is, after he learns how to play the lawn game.

Passionate about dancing on roller skates, he shared about how he taught thee couples how to dance when he was in his 70s, long before his wife passed away three years ago.

“If my knees were still good, I’d go out roller skating 2-3 nights a week,” he exclaimed.

As for France, which he loves and considers a “cool country”, he’s not gone back, though he’d like to. With his son by his side, Wells is planning to celebrate the 70th anniversary of D-Day in Bradford, Virginia, during the commemorations that will take place there.

“Even though it was 70 years ago, it’s still hard… the thought of killing someone although it’s war. I don’t think I’d want to do it again. I was glad to go. I didn’t want to go. … We weren’t forced. We were drafted to do our job to the best of our abilities. It’s a dreadful thing, war.”

Like many veterans, there are certain places of the memory that are better left untouched.

“It was an interesting trip. I learned a lot. I learned to be positive.”