What a success! 48 teachers of French as a foreign language (FLE) attended a free workshop on May 3 on the theme “Developing oral skills in the French classroom!”

Proposed by the Cultural Service Department of the Embassy of France in the United States, the Consulate General of France in Atlanta, and Waddell Language Academy (Charlotte, NC), this training was run by Pierre-Yves Roux, from the International Center for Educational Studies (CIEP).

Since the 80s and the appearance of the so-called "communicative" approach, oral communication appears as a major component of foreign languages teaching. This priority has been confirmed by the action-oriented approach and it is therefore important to equip teachers with skills and tools to help them develop these language skills during their courses.

This training allowed the participants to work on the complementarity between reception and production and clarified the place of oral communication, its objectives and its components, as well as some didactic and methodological principles to make the approach more motivating and effective. 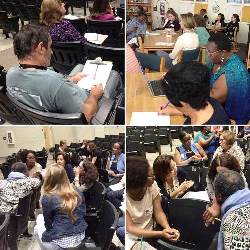 The participants learned a lot and had so much fun! Thank you Pierre-Yves Roux!

When will the next training take place?

The Cultural Services of the Embassy of France in the United States and the Consulate General of France in Atlanta regularly organize free trainings for French teachers. The next training "Learning and Teaching with TV5Monde" will take place at the Alliance française d’Atlanta on Thursday, 29 June 2017. More info here!