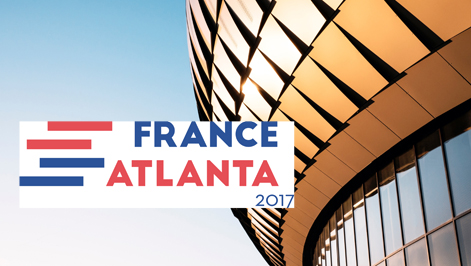 The Consulate General of France in Atlanta and the Georgia Institute of Technology will co-present the 8th Annual France-Atlanta, a series of French-American events centered on innovation, from October 9-November 3.

The 2017 program will highlight developments and partnerships in some of the most pressing topics of the day such as emerging viruses, sexual and reproductive health in disaster-torn countries, and contemporary African artistic creation. Industry experts, researchers and artists from France will come to Atlanta to participate with their American counterparts in the various workshops, panel discussions and cultural programming that are presented under the high auspices of the ambassador of France to the United States, the governor of Georgia and the mayor of Atlanta.

France-Atlanta 2017 comprises approximately 20 performances, talks and discussions across the spectrum of culture, science, humanitarian affairs and business, which are free and open to the public unless otherwise noted. We invite you to participate in this year’s events:

The consulate’s culture service has partnered with the High Museum of Art to help present its "Making Africa" exhibition, which will include discussions and screenings with a new generation of African leaders in film, photography and art. In addition this year’s culture events include a collaborative dance premiere, a mural installation, an architectural exhibit and even a contemporary music premier.

Researches and academics will gather for Bridging the Sciences, a daylong symposium on advances in HIV, viral hepatitis and emerging viruses. Then industry leaders, engineers and researchers in the fields of aerospace and wastewater will convene for a handful of exciting talks on the latest technology and the future of their fields.

During a one-day symposium, NGOs and experts gather to discuss opportunities and challenges in sexual and reproductive health (SRH) in disaster-torn and developing nations. The consulate also presents its annual education series, in which humanitarian workers involved with the French-speaking world talk about their work with students who are learning French.

France leads the field at this year’s American Public Transportation Association (APTA) EXPO with a French Pavilion that showcases the latest technology in public transport. And for a 13th year, the FACC Crystal Peach Awards luncheon celebrates three outstanding companies that exemplify French-US cooperation in business. Under the consulate’s third and final business event, participants in an Atlanta-Toulouse startup exchange swap cities for a week as part of an exciting opportunity to explore what each other’s country has to offer.

France-Atlanta 2017 is made possible with the support of Anne Cox Chambers, Delta Air- Air France-KLM, Gilead, Nissan, MailChimp, Rubicon, The Atlantan and Jade Fiducial, along with local French-American associations and more than 30 state and international partners.