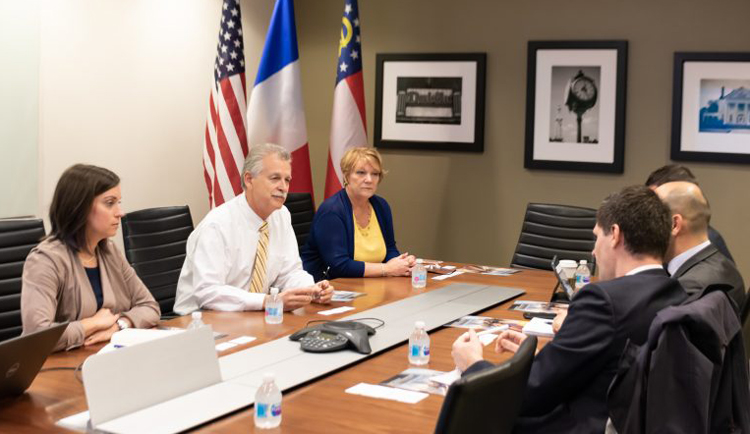 A delegation from the French Embassy in the United States’ Regional Economic Service (RES) visited Atlanta from March 13 – 15, with an objective of examining, with the help of local institutional and economic actors, the current issues and challenges in Georgia and the city of Atlanta, which is the economic capital of the U.S. Southeast.

The delegation was composed of the Business and Innovation division as well as the Ecology, Sustainable Development, Energy and Transport division of RES, plus the Social Affairs department from the Embassy of France in Washington.

Like other American metropolitan areas regularly visited by the RES, Atlanta is a striking example of a city that has seen economic development while also facing transportation, inequality and urban planning challenges. The mission also highlighted the importance of the economic ties between France and Georgia, with an annual trade volume of more than $3 billion, while French companies generate nearly 20,000 jobs across the state.

The delegation also met with the Foreign Trade Advisors of France (CCEF) / US Southeast Committee during a general meeting at Orange Business Services’ U.S. headquarters, as well as officials from the French-American Chamber of Commerce of Atlanta (FACC).