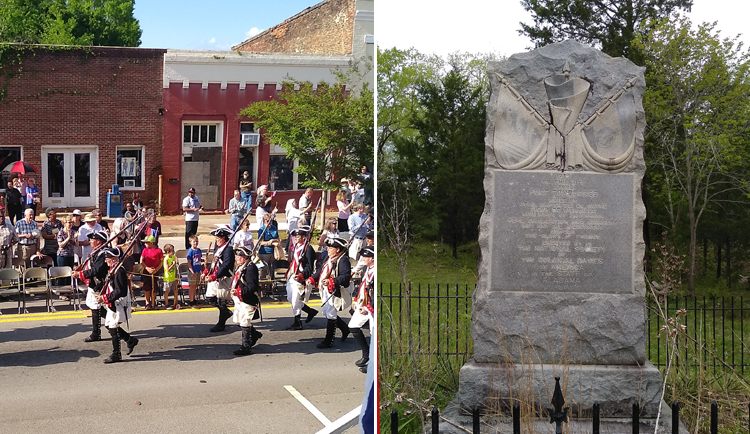 In 2018, West Alabama University won the second place France on Campus Award, a grant given to student groups that focus on French culture. However the town of Livingston, where the university is located, has an even deeper connection to France which goes back centuries.

In 1736 Lousiana Governor Jean-Baptiste Le Moyne, aka the Sieur de Bienville, constructed Fort Tombecbé some 270 miles from modern-day Mobile, overlooking the Tombigbee River. The bastion quickly became a strategic post in France’s effort to keep the British from encroaching on its territory. During the Choctaw Civil War of 1746-1750 the fort became a supply and weapons depot for the Choctaw Indians as well as the place where the treaty marking the end of the war was signed.

More than a decade later, the French and Indian War between Great Britain and France ended with the signing of the Treaty of Paris in 1763. Under the accord, France ceded all of Louisiana except for New Orleans to the British crown. British occupation of the fort lasted until 1768 at which point ongoing fighting between the Choctaw and Creek Indians ended. The fort was then used as a site for intensive trade and was progressively deconstructed. Some two decades later in the 1790s Fort Tombecbé was reconstructed under Spanish occupation. After Spanish departure and the end of colonial rule in Alabama, the fort became an important trade post for settlers and remained active until 1823.

Today Fort Tombecbé belongs to West Alabama University and the Archaeological Conservancy, and is home to ongoing archaeological excavations and educational programs. To find out more about Fort Tombecbé visit its official website: http://www.forttombecbe.org/

In Sparta, Georgia, April 13 marks Marquis de Lafayette Day, for which the Sparta-Hancock Chamber of Commerce and Hancock Historical Society organized a reenactment of the Marquis’ arrival in town in 1825.

Lafayette, the French hero of the U.S. Revolutionary War, returned to America for a triumphant tour of the then 24-state nation in 1824. He arrived in Sparta, Ga., on March 26, 1825, before traveling onward to Milledgeville and then Warrenton. His secretary, Auguste Levasseur, wrote in his journal that they had been warmly welcomed in Sparta and also noted that the roads were so bad that the Marquis was forced to ride on horseback because traveling seated in his carriage was making him sick.

The Marquis’ journey across the nascent United States was designed to reignite the revolutionary spirit among a new generation of Americans, the tour being organized some 50 years after the Battle of Yorktown, the last major fight in the war.

In addition to the Marquis, another Lafayette was honored during the day’s celebrations: James Armistead Lafayette. This second Lafayette, who was a slave, joined the Marquis’ forces and worked as a double agent against the British. At the end of the Revolutionary War, the Marquis wrote a letter freeing James Armistead. In honor of the gesture, the latter adopted the name Lafayette.

Above photo: Celebrations in Sparta, Ga., marking Marquis de Lafayette Day and a marker noting the site of Fort Tombecbé in Alabama.