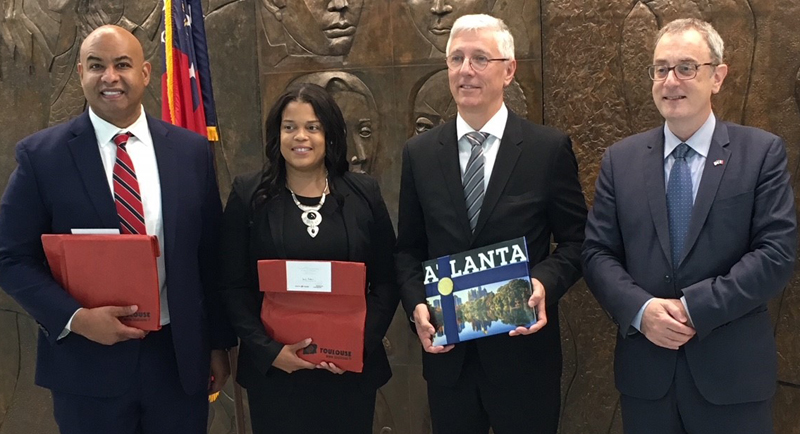 Delegates from Toulouse, France visited Atlanta during the month of June as part of a mission to connect the two sister cities in the realms of tech, science, business, culture and administrative affairs, while also solidifying participation in France-Atlanta 2018, the event series put on by the French Consulate General of Atlanta every fall.

The three officials from Toulouse not only met with consular staff but a number of city officials including the mayor’s Chief of Staff Marva Lewis, Executive Director of Cultural Affairs Camille Love and representatives from the Office of International Affairs.

The delegates were also in town to help plan the International Startup Exchange, a yearly cross-cultural competition that sees two Atlanta companies travel to Toulouse and two Toulouse companies travel to Atlanta to survey the tech landscape and explore business opportunities in each other’s country. Last year, the United Kingdom also participated. The exchange occurs during the fall as part of France-Atlanta, further connecting the U.S. Southeast with France in the realm of business.

Together, they met with various entities from the city’s startup scene, including Supernova South which organizes the yearly Startup Week Atlanta, and Startup Atlanta which works to introduce, connect, support and expand the entrepreneurial ecosystem within the region. In addition, they also paid a visit to the Metro Atlanta Chamber to discuss Atlanta’s economic profile and French businesses in the region.

The delegates were not going home without at least a small celebration – Consul General Louis de Corail hosted a reception at the French Residence, not only welcoming the delegates but also members of the Atlanta Toulouse Sister Cities Committee and Atlanta’s French Heritage Society, which is raising money to help restore Toulouse’s Notre-Dame de la Daurade Basilica.

As part of its mission, the French Consulate works to promote cross-Atlantic ties between France and the U.S. Southeast in the domains of culture, science, humanitarian affairs and business. Various members of the consulate’s staff including its science, culture and press attachés as well as a representative from the consulate’s business affiliate, Business France, joined the delegates in brainstorming how to further connect the two cities, which have a long and storied history of close cooperation.

Atlanta and Toulouse became sister cities on December 17, 1974 when mayors Maynard Jackson of Atlanta and Pierre Baudis of Toulouse signed a proclamation. Jackson’s mother had studied at the university level in the city and his parents were married in “la Ville Rose,” as Toulouse is often called for its ubiquitous red-pink bricks.

Toulouse is home to a number of leading institutions in the field of research and technology, including the European headquarters of Airbus as well as Toulouse Cancerpole, a major cancer research center. Atlanta, meanwhile, hosts the headquarters of multiple major U.S. companies such as UPS, Delta and Coca Cola. Additionally, it is the seat of the world’s busiest airport.

Together, Atlanta and Toulouse are formidable titans in the realm of technology, research and business. Connecting their two economies, as well as cultural and humanitarian institutions, creates a leading transatlantic force, which is at the forefront of innovation and French-American cooperation.

For a slideshow of the delegation’s visit, click on the photo below: 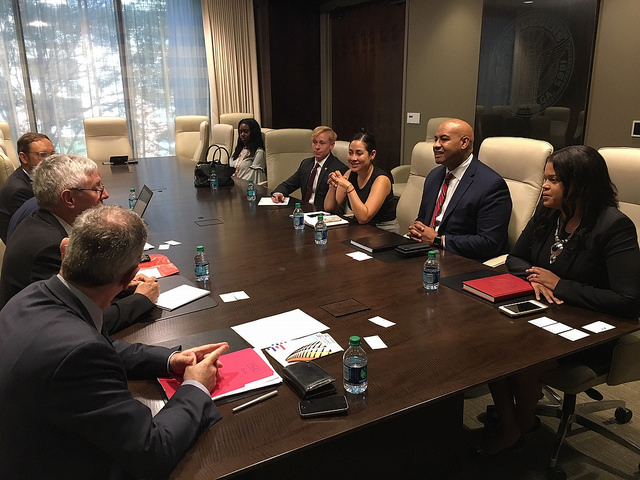