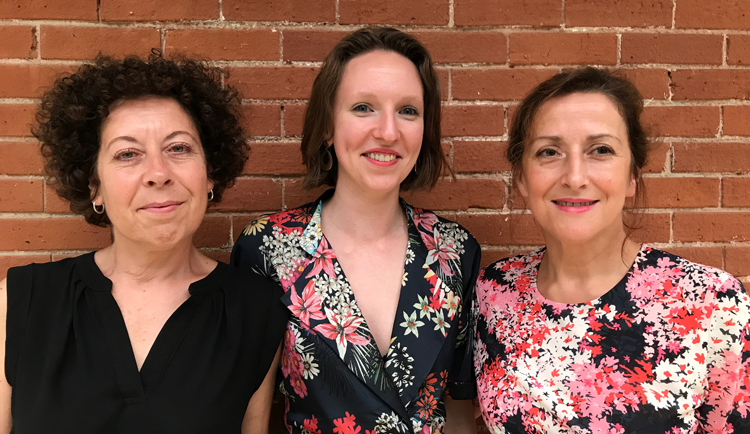 Three new team members are joining the cultural and consular departments at the French Consulate General in Atlanta. The fall will be a busy and exciting time to start ahead of France-Atlanta 2018, our annual event series in science, culture, business and humanitarian affairs. Bienvenue à Nathalie, Pascale and Anne-Lise.

Nathalie Gonzalez: vice consul Nathalie Gonzalez took office at the Consulate General of France in Atlanta on September 4. She has been with the French Ministry of Europe and Foreign Affairs since 1992. She has worked abroad in a number of positions: as secretary to the ambassador of France in Tokyo, as the public agent in charge of French administration in Osaka and London and as head of visa services in Pondicherry, At the ministry’s headquarters she worked in the Center for International Conferences and Official Visits, in management at Human Resources, and finally at the Crisis Support Center.

Pascale Beyaert: cultural attaché Pascale Beyaert, a graduate of IEP Strasbourg and the Sorbonne University Nouvelle Paris, has over 25 years of experience. She began her career by creating her own advertising and publishing company then served as director of development for various corporations (in financial services, advertising and graphic design). Later she served as a theatre producer and general secretary of CCNRB in Rennes. Concurrently, she became a performer for a famous stage director and afterwards was hired by France’s Culture Ministry as a theatre advisor, theatre inspector and finally an inspector for the Ministry of Culture’s General Inspection. A specialist in the performing arts, she is particularly versed in the evolution of artistic and cultural practices, especially as they relate to digital technologies.

Anne-Lise GALLAY : deputy cultural attaché, educational and university affairs Anne-Lise Gallay graduated from the Sorbonne University with a master’s in linguistics and from Lille University with a master’s in intercultural relations and international cooperation. Afterwards, she was hired by the Embassy of France in Ireland as cultural project manager. This experience has inspired her to continue working internationally. In her new position, she helps develop dual language programs and promote French language.