Stéphane Bertolino, a French Harmonica player in the US Southeast 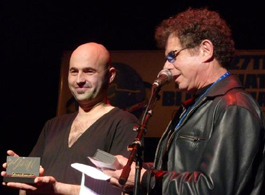 When Stéphane Bertolino begins our telephone interview from his native town of Toulouse, France, he is in the middle of listening to a jazz album. “Music is my passion,” he says, as he shuts off the album to talk about his blues group AWEK and the award he recently won for “Best Harmonica Player” at the International Blues Challenge in Memphis, Tennessee this past February.

Stéphane Bertolino comes from a family of musicians, giving him exposure to the music scene at a very early age. Growing up in Toulouse, it was at the ripe age of 16 that Bertolino found himself in a piano bar where he first discovered a harmonica player, accompanied by just a piano. “The sound of that harmonica there, it transformed me,” he says. “I said to myself, ‘that’s what I want to do, that’s what I want to play.’ The sound left me completely paralyzed.”

The next day, Bertolino went out and bought his first harmonica and began teaching himself to play the instrument. Without any formal training, Bertolino used his cassette player and his ear to become the harmonica virtuoso he is today. “I would sit there with my stereo, hitting stop/play/stop/play until I could reproduce the sounds I heard.”

Then in the early 2000s, Bertolino found an immediate connection with the other musicians who make up the French blues group, AWEK— Bernard Sellam on vocals and guitar, Joël Ferron on bass, and Olivier Trebel on drums. Seven albums and thousands of concerts later, AWEK has earned themselves extensive praise on both sides of the Atlantic. Critic Serge Sciboz from the Blues Country and Rock ‘n Roll Review (BCR) called their musical style “an explosive cocktail, a melting pot of groove and feelings, mingling classicism and originality, passion and soberness, orthodoxy and personal impression.” The band’s latest album, It’s Rollin’, recorded in Austin, Texas, garnered them the respect to be invited, for the second time, to the capital of blues for the International Blues Challenge of Memphis 2011.

Bertolino confesses he was rather surprised to learn that there was even a category for best harmonica player—and even more surprised to learn that he was the winner! He took the stage and accepted the award from famed harmonica player and manufacturer, Lee Oskar, dedicating the award to his grandmother, who recently passed away, and of course to his band mates who make up the group AWEK. “Music isn’t a competition though. We do it because we love it,” says Bertolino.

So what’s next for Stéphane Bertolino? After Memphis, the group is headed to Berlin to compete in the European Blues Challenge, and plans to begin work on an eighth album are already in discussion, which Bertolino says the group will record, hopefully in California, but most certainly in the United States.

For more information about AWEK and their latest album, It’s Rollin’, visit their site at: http://www.awekblues.com/accueil.htm