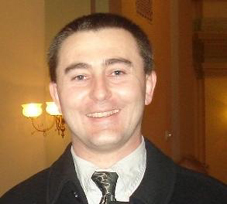 Stéphane Allagnon, French teacher and the head of the foreign languages department at Sandy Creek High School, has also been the American Association of Teachers of French (AATF) President in Georgia since March 2009. Living in the U.S. since 1998, he is deeply involved in promoting French language and culture in our circumscription.

Hailing from Roanne in the Loire region, Stéphane Allagnon realized at an early age that he was fond of foreign languages, partly thanks to numerous travels abroad with his parents. In order to improve his knowledge and master other languages, Stéphane Allagnon focused his studies on foreign languages. By the end of his schooling, he was able to master four languages: English, Italian, Spanish, and Latin. His desire to share this passion for languages with younger generations led him down the path of education and teaching. According to him, “teaching is both sharing knowledge with students and sharing a common desire to learn more everyday.”

He could have taught anywhere, but chance brought him to the United States. After graduating from high school, he decided to spend a year abroad. “I applied for several programs through the Rotary Club in Canada, the UK, Australia, and the U.S.,” he said, “but the U.S. one was the only program to accept 18-year-old students.” His year abroad in an American high school turned out to be crucial for his future. He had a great stay and enjoyed discovering the U.S. and American culture, leading him to focus his studies on English and American civilization. But most importantly, he met his future wife during his stay in the U.S., strengthening his link to this country.

After his studies in Saint-Etienne, where he received an associate’s degree in English as well as two bachelor’s degrees in American Civilization and Education, he had his first hands-on experience in the teaching field. As a French assistant in Northern Ireland, he realized his long-time dream of living in a country that he loves for “the richness of its culture and the beauty of its landscapes.” He finished his studies with a master’s in American Civilization, while teaching English in a private school.

In 1998, Stéphane Allagnon and his wife decided to move to the United States, in Georgia where his wife’s family lives. He noted, “The way of life in this region is really enjoyable and offers numerous positive aspects— Atlanta and its airport are really close, which allows us to travel to France often, and the French community’s presence in Atlanta and Peachtree city help them to not feel too homesick.”

When he became a teacher, his wish was to offer a quality education to his students with an emphasis on the cultural aspect. “While I was a student,” he said, “I realized that some of my languages classes didn’t touch much on the cultural aspect of the language. I missed not knowing more about the country’s culture. So I decided to become a teacher and help the students know more about this aspect.”

Teaching foreign languages at Sandy Creek since 1999, first Spanish and then French, he is now the Head of his high school’s foreign languages department and teaches French to five classes. More than just teaching the intricacies of French to his students, his goal is to present French culture and history to them, notably through literature and cinema. He also organizes field trips to France with his high school every three years. With a majority of his students attending French classes at the university level, and a lot of them enrolling in summer internship programs in France, the teacher’s main goal has been completed!

Stéphane Allagnon is also fulfilling his second assignment as a teacher, “continue to learn and train.” Through the AATF, this French teacher is taking part in the promotion of French in our circumscription and participates in training sessions in Georgia. The AATF has two annual meetings, as well as several workshops and conferences he attends, allowing him to pursue his goal of promoting French in the Georgia.