Two new staff members and an intern have joined the French Consulate General in Atlanta. 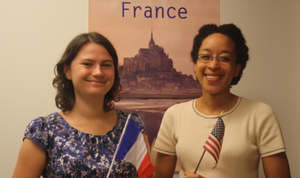 The fall is a busy and exciting time at the Consulate, with the launch of France-Atlanta 2019, our annual series of science, cultural, business and humanitarian affairs events.

Deborah : Agent in Charge of French Administration Deborah joined the Consulate in September. She has worked for the French Ministry for Europe and Foreign Affairs since 2013. After working at the Ministry’s Human Resources Department in Paris, she worked abroad in East Asia as a public agent in charge of citizenship and civil affairs.

Lindsay: Communication and Press Attaché A Francophile and native of metropolitan Atlanta, Lindsay joined the Consulate in September. She previously worked in the Communications and Press Department of the French Ministry for Europe and Foreign Affairs. Lindsay has a master’s degree in political and social communications from the University of Paris Panthéon-Sorbonne and a master’s degree in geography from The George Washington University.

Lucie : Communication and Press Intern Lucie is a master’s student at the Skema Business School in Lille, France. She previously interned for the French National Human Rights Institution (CNCDH) and for the Délégation à l’information et à la communication. Lucie joined the Consulate General in September for a three-month internship, during which she will assist the Communication and Press Attaché with the 10th edition of France-Atlanta.