Pourquoi Pas? Inspiring Students to be Their Best [fr]

Performing hip hop in French class? Sounds like fun. That’s why college students at the University of Georgia, Athens created the project “Pourquoi pas? Inspiring Students to Be Their Best.” 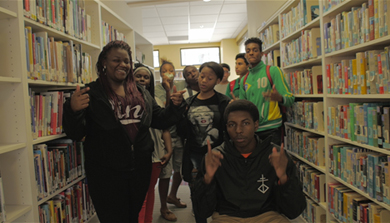 The program is in use at Clark Central High School in Athens where high schoolers have a chance to compose and produce an original hip-hop song. The project, which was honored with second place by the France on Campus Awards, aims to give participants "a purpose to stay in school and an interest to learn French."

Music Only, the UGA student organization that created the program in 2014, aims to bring diverse groups together to experience music and positivity. Kelsy Reddick, the current president of Music Only and a student in health promotion, says the organization “seeks to enhance the music culture on campus and in the Athens community.”

Music Only is partnering with the Consulate of France in Atlanta to create positive experiences in the arts and music. Through this collaborative project, Music Only wants to inspire students at UGA and Clarke Central High School by co-producing a French hip-hop song and video that will be premiered at both schools.

The France on Campus Award is intended to help student organizations eager to launch or continue a major France-related project by providing a unique package of funding, mentoring and networking. With this support, awardees will expose new audiences to France and French culture on their campus and beyond.