Home > French presence in the US Southeast > Honored French citizens > Francois Birgand: a professor with a passion for water

Francois Birgand: a professor with a passion for water [fr]

Born in Nantes and raised in the tiny village of Montfaucon, Francois Birgand has always loved water. As an associate professor in the Department of Biological and Agricultural Engineering at North Carolina State University, his professional life is devoted to research and education about water quality, particularly as it pertains to agriculture. His professional enthusiasm for water is matched by personal enthusiasm, and his fascination with water and marine environments is demonstrated in his love of kayaking and canoeing. One only has to listen to him speak about water for a moment to sense his passion.

Dr. Birgand studied agricultural engineering at the École nationale supérieure agronomique de Rennes, and it was an internship for his program in Rennes that first brought him to North Carolina. During his internship, he fell in love with the sense of “total independence” that accompanied his move, and the research culture he found. He was immediately impressed with the level of respect researchers receive in America. “In the United States”, he explains, “research is a noble profession”. After his internship was completed, one of his American professors suggested that he stay in North Carolina. He did, and went on to complete a doctorate at North Carolina State University in 2000. 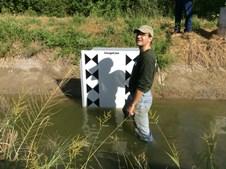 It is easy to hear the passion in Dr. Birgand’s voice when he speaks about both research and teaching. His research has a seemingly never-ending number of practical applications, both agricultural and conservational, but what he loves most about research is that it is a job that is never complete. When it comes to teaching, he finds immense satisfaction in knowing that his students understand the complex material in his courses. “When your students can explain something complicated in simple terms – that’s when you know, as a professor, that you have won.”

Though he loves North Carolina, Dr. Birgand makes constant effort to stay connected with his French heritage. He frequently collaborates with researchers in France, who he says are some of the best in his field. Dr. Birgand sees these collaborations as giving his American students a deeper sense of cultural understanding, something not usually associated with scientific education.

At home, Dr. Birgand stays connected with France by reading French news every day - his favorite papers are Le Monde and Le Figaro - and speaking French with his family. In his spare time, Dr. Birgand enjoys spending time outdoors with his children. The Birgand family takes full advantage of the all of the nature North Carolina has to offer, and frequently camp, bird watch, and visit national parks in the area.

Although he loves his life in North Carolina, he misses “the little things” about France, like French cuisine, and above all, what he calls the “discussion culture” in France. In France, friends, acquaintances, and colleagues often engage in candid, and sometimes controversial, conversations over a glass of wine, and relish hearing different points of view. In America, he says, he has not been able to find a comparable venue for discussion. “I miss being able to have open discussions without being afraid of offending someone.”