Home > French presence in the US Southeast > Honored French citizens > Jean-Baptiste Laporte : The American dream of a French sports (...)

Aficionado of his job and football, Jean-Baptiste Laporte overcame years of rejection and continuing education to realize his dreams of becoming a physical therapist and athletic trainer for an National Football League team.

On February 8, 2016, the first Frenchman participated in the Superbowl of the National Football League (NFL) in Santa Clara, California. Jean-Baptiste Laporte, physical therapist and Assistant Athletic Trainer for three years now with the Carolina Panthers, recognizes the importance of the moment.

"It was a major opportunity that we try to embrace with humility. To be the first Frenchman at the Superbowl, I will never forget," said the serious, young Parisian. 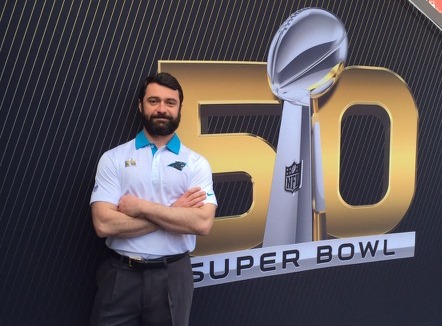 Indeed, to be where he is today, is the result of a great love story with his favorite sport, discovered around the age of 11 during an exchange program with the U.S.A. and the outcome of years of perseverance, rejection, and education that forged his character and enhanced his professional skillset.

The NFL, with 1200 elite players, is the only major professional league in the world. The field is extremely small, especially for athletic trainers and therapists, and it’s almost impossible to get in without following the typical channels of schools, internships, and professional connections. More importantly, the profession, as is the case for lawyers and doctors, is highly regulated by U.S. immigration. To have a standing chance, Laporte would have to have a curriculum vitae proving he had something to offer that Americans didn’t. He therefore put in place a rigorous plan of action to make himself appeal to a professional American football team.

In 2004, this Franco-Canadian left his family and friends and headed to Quebec alone where he began from scratch, redoing a degree in athletic therapy in English at Concordia University because "that was part of the plan".

Laporte gave himself ten years to pursue his dream to join a football team. For eight years, he sent his résumé for an internship—the typical way in—to all thirty-two NFL teams. Establishing benchmarks each year to continue to progress in his action plan, he redid his degree in the U.S., completed several certifications, and enhanced his CV with additional experience including working as an athletic trainer and physical therapist for an amateur Canadian team or teaching at Concordia University.

"It was long. There was a lot of rejection each year—in the U.S. and even in France. I had to give myself challenges each year and check off boxes on my list, always moving forward."

About five years ago, a conference in the Southeast proved a perfect opportunity to finally meet the Carolina Panthers.

"I had to meet them. It was the only way because I didn’t have any [inside] connection or reference. Usually, that’s how it’s done. I needed to interest them and to do so they needed to see me. They met with me for a couple hours and were pretty nice.”

Finally, after so many years of studies, Laporte found himself overqualified to be an intern. So he applied for a fulltime job and in 2013, almost ten years later, the Carolina Panthers hired him.

Why hire Jean-Baptiste Laporte, dubbed J-B by his colleagues, instead of an American? Perhaps it was his experience, or his approach, his personality, or even his French accent that makes his colleagues laugh. Whatever the reason, it’s sure that he had a different profile from other colleagues and the team had to think outside of the box to choose him. 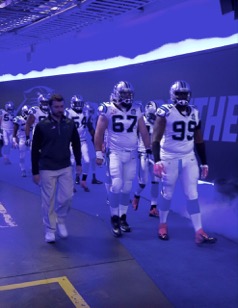 With the same rigor and passion that Laporte put into the realization of his dream, he throws himself into his work of rehabilitation for the 63 players of the team, seven days a week during game season, with days that sometimes last as long as fifteen to twenty hours.

"I rarely consider this work. It’s a passion. Yes, I’ve had complicated cases, but we always get there. It’s important to note that a good athlete makes a good physical therapist. The more a person is motivated, the faster they recuperate."

In the off-season, Laporte takes full advantage of his free weekends with his girlfriend with evenings with friends in Uptown Charlotte where they live, ballades, playing football himself, or just enjoying the little pleasures of life.

“For now, I’m really happy. I don’t feel like I’ve changed much. I’m French first and foremost. I have as much fun with the players as when I was in France. We laugh a lot. They’re all aware of my story and they appreciate that. At the end of the day, it’s a pretty American story. It was long. It was complicated, but it’s possible.”