Home > French presence in the US Southeast > Honored French citizens > Christian Amelot : a thriving French island in the Sea of the (...)

Christian Amelot : a thriving French island in the Sea of the South [fr]

If there’s one thing that chef Christian Amelot knows well, it’s food. But more than just French food, he knows the tastes of the American Southeast and how to balance the Southern palate with the French tradition of culinary excellence. Perhaps this could be part of the secret to his success of more than thirty years in Jackson, Mississippi. 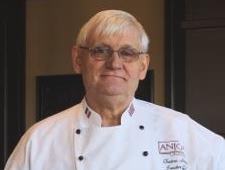 “I grew up cooking at home,” said the tall, almost 64-year-old chef, who jokingly declared himself the “little girl” of the three brothers born to a family of bicycle retailers in the Loire region.

A graduate of the prestigious Savoie Leman Culinary School in Thonon-Les-Bains, France, Amelot began an illustrious career as the personal chef to French Foreign Minister Maurice Schuman in lieu of military duty for the highly asthmatic young chef. In this capacity, he served many visiting dignitaries such as Henri Kissinger. He also worked in such reputed kitchens as the Hotel Hermitage, a five star hotel in La Baule France, or the gourmet La Braiserie in Marseilles before an opportunity presented itself to come and try his luck in the United States.

In 1984, he moved his wife and two daughters to Houston, Texas and then to Jackson, Mississippi, where the popular Sundancer restaurant was looking for a European-trained pastry chef. Despite a bit of a rough start, Christian Amelot knew that the U.S. was where he wanted to be, even if his wife was not too keen on the idea. “She didn’t speak English, and it took her ten years to apply herself,” the widower said fondly of his wife, Patricia, who he lost five years ago.

When the Sundancer closed in 1988, Amelot shared his culinary known-how as corporate chef for Valley Food Services for almost twenty years, then with with US Food Service’s Jackson-New Orleans Division as their Corporate Executive Chef. When his daughter, Anne, opened the French inspired Anjou Restaurant in 2012, he provided consultation and even created the menu. “Anjou is the closest (to French cuisine) that we can do in Jackson, which is both a big city and a small town. It’s not easy,” said Amelot of catering to Southern tastes. “In the South, people love anything that’s fried. They like their food sweet, but a little spicy. We had to change the spices and the recipes. Our clients prefer it this way.”

In 2015, Amelot, who doesn’t care much himself for spicy food, finally bent to his daughter’s persuasion to take the reins of the kitchen and come on board full-time. One of the first things he did was experiment with more traditional dishes that may seem exotic to the American table. Lapin à la barigoule was top on the list.

“People were hesitant at first. Then, they couldn’t get enough. It became impossible to find local, Mississippi rabbit, and I had to look to as far as Canada.”

Though he’ll probably never dare to introduce langue de boeuf sauce piquante— the favorite dish of his 85 year-old mother, who still lives in France— after thinking long and hard of a favorite dish that could perhaps make an appearance on the menu, Amelot’s eyes lit up at the thought of raie au beurre noir or ris de veau. For the time being though, these recipes remain in the more intimate circle of this motorbike repair hobbyist and grandfather of three beautiful granddaughters, who sadly don’t speak French. “I’ve always loved to cook for small numbers.”

Proud to participate in events that highlight the French culinary tradition or unite the small French and Francophile community of Jackson-- from offering a special menu for the Chandeleur (Crepes), Bastille Day (French Independence Day), or the Goût de France/Good France international gastronomy event organized by the French Ministry of Foreign Affairs— Amelot is already looking to his eventual retirement. “Thirty years, that leaves its marks,” a point reinforced by the English words so naturally injected into the French conversation. “I’d like to end my career here (at Anjou).”

Tapping a finger to his temple, he cracks a smile. “I have a lot of information. My goal is to share as much as possible while I can.”