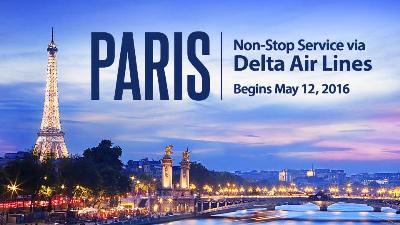 The growth of the international presence in the region, including the SKEMA business school in Raleigh and local French and multinational companies like IBM and Quintiles played an important role in securing this new flight, which will further expand the region’s global reach and ability to attract new talent.

“We are delighted to learn that Delta Air Lines will add this important direct flight between Paris and Raleigh-Durham, an effort for which our honorary consul to Raleigh, Marie-Claire Ribeill has been working with local authorities for a few years now, “,” said Consul General Denis Barbet. “This announcement proves what we have been saying for years: the Research Triangle is an important gateway to enhancing cooperation, investment, and exchange between the U.S. Southeast and Europe.”

The new service to Paris will enhance business opportunities, multiply research and outreach programs of the region’s major universities, and maximize regional competitiveness. It will also facilitate the transatlantic connections of the more than 60 French companies and 1600 French expatriates who call North Carolina home.