Home > French presence in the US Southeast > Honored French citizens > Jessy Labbé : at the crossroads of microorganisms and French-American (...)

Jessy Labbé : at the crossroads of microorganisms and French-American bioenergy [fr]

Whether hiking in the Appalachian or the Vosges Mountains, you can bet that Dr. Jesse Labbé notices the smallest details of his environment. Where the untrained eye may observe trees, greenery, and earth, this native of the Lorraine region of France, sees the big picture of life, from the organization of genomes to the communication between organisms, to scientific exchanges, leading eventually to economic startups that create new sustainable solutions to power our modern world. 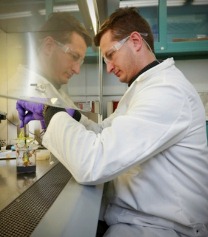 Used to frequent moves from his childhood with a military family, Jessy Labbé arrived in 2007 at the U.S. Department of Energy’s Oak Ridge National Laboratory (ORNL) in Tennessee as part of a collaboration that he had initiated during his doctorate at the prestigious agriculture school, INRA in Nancy, France in order to continue his research on fungal genomics and ecogenomics of interactions groups, improve his English, and establish transatlantic connections with France. At the time, climate change wasn’t really addressed, not in the media or in the scientific community, contrary to the environment in Europe where he had studied. Things have greatly changed since then and, as sustainable energy has a biological aspect, this molecular geneticist and plant mycologist found himself strategically placed to offer, today, a significant contribution to the scientific community. After completing a post-doctorate with U.S. DOE in 2009, he was offered a job as a Staff Scientist at ORNL in 2012, enabling him, as well as his young wife who had never before moved from Lorraine, to return to Tennessee. Thus, Jesse Labbé took over the French-American program that he had initiated 6 years earlier. Today, this transatlantic partnership is made up of 78 scientists and doctoral students as well as support staff.

“The program has grown a lot, particularly in regards to bioenergy. France and the United States have different and complementary expertise that translates into concrete economic results. The current environment is extremely favorable and we are working to renew the cooperation and expand it in France, in particular.”

Coupled with technological tools from genomics to ecology, the scientists decrypt interactions between microorganisms (bacteria and fungi) and the popular tree, known for its rapid growth and which represents a one of the most sustainable and clean biofuel sources, without creating competition with food agriculture. “I love microbiology. Bacteria and fungi are a rich environment for any organism. By studying how they interact with other organisms, we learn about their communication on a genetic level which enables us to create new energy.”

Concretely, the study of interactions “from roots to genes” can be applied to the management of forests of today and tomorrow, the production of biofuel and new materials from biomass without creating a food deficit, and even the identification of new sources of lipids produced by fungi that can offer an excellent nutritional base for humans as well as another source of clean energy. “Knowledge of microorganisms and their environment helps us to take advantage of natural biomass in our industries, all for a sustainable development in a sustainable environment.”

Life outside the lab 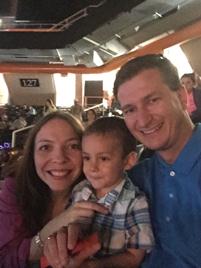 Thrilled by the professional development that this abroad experience has offered, Jesse Labbé prefers to focus on his current scientific research as well as his wife and four-year-old son, rather than plan too much for the future.

"I’m really excelling here. I am known for what I do and I enjoy it.”

It helps that he is well-surrounded by French colleagues at the University of Tennessee-Knoxville, where he is an assistant professor in the Department of Biochemistry, Cellular and Molecular Biology, and where numerous compatriots come to study or work at some of the French companies with sites in the region. Moreover, Dr. Labbé is very involved in the development of exchanges between the U.S. and France whether it’s in research or on a more local level with the Alliance française or event with neighbors.

Curious, determined, and a bit of a perfectionist, Jessy Labbé has found his rhythm in the United States. When he’s not in his lab, this martial arts enthusiast and former karate instructor enjoys traveling, discovering new cultures, reading, and playing golf—an accessible sport that he discovered in the U.S. where he can relax and have a good time with friends in a low-key environment. 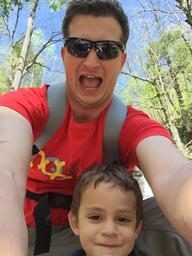 Nevertheless, the secret of his passion for his work lies in its connection to his first love. Labbé confesses, “I love nature and collecting new organisms." For those who love to have good mushrooms on their plate, there is no better hiking buddy than this passionate plant mycologist.

“There is a great variety of wild and edible mushrooms in the United States, especially in the Appalachian east of Tennessee where this is the largest diversity of fungi in North America (with locally more than 3000 species). You can gather morels, chanterelles and even truffles (white ones, close to the Italian truffle) if you know where to look…. Of course, the best truffle is still the black truffle from Perigord in France.”