Home > French presence in the US Southeast > Honored French citizens > Jean-Pierre Chambas: A Love Letter To The South

Jean-Pierre Chambas: A Love Letter To The South [fr]

Jean-Pierre Chambas, CEO of Aleph Wines, a large company dedicated to the distribution of wines, beers and spirits, has, it seems, fulfilled his American Dream.The culture of wine has always been an important part of his life. Today, he provides all of South Carolina with an extraordinary variety of wines from France as well as the rest of the world and employs more than thirty employees. Passionate and hardworking, Jean-Pierre Chambas is also very much in love with the South. 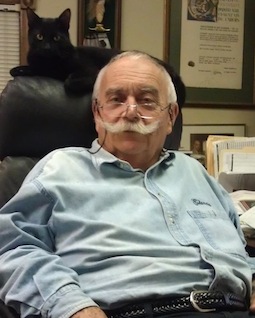 Jean-Pierre Chambas grew up in Cahors in the Lot, a region in the Southwest of France. Destined to follow his father steps and become a lawyer, he enrolled in Toulouse’s Law School. In 1971, however, Chambas decided to change his path. Weary of France and a career for which he has little interest, he chose to follow his ambition and yearning for adventure. This led him to South Carolina.

“I decided to set off on a journey, to learn to live for myself and build something on my own,” he explained.

Home to his wife of now more than forty years, Chambas was already familiar with the state of South Carolina which he dearly regarded. Yet, once there, he knew that he would have to “start from scratch.”

“I had to earn a living. Back home I was a ‘fils de bourgeois’ (son of the bourgeoisie) but here, I really had to get to work.”

Carried by his belief that America is a land of opportunity, where if you work, you can earn a living, Chambas became the first employee of a wine merchant, where he was able to increase his knowledge of wine.

During to eighties, Chambas became a cellar man, himself. Then finally, he launched a career in distribution, which led him to where he is now.

For Jean-Pierre Chambas, wine is a vocation, a fundamental element of his French cultural heritage, which he cherishes and strives to pass on to his entourage. This passion goes back to his childhood, spent among the beautiful vineyards of France’s Southwest. “I fell in love with wine and everything about it very early in my life,” he recalled.

“When I was as little as five or six years old, I would often go, on Sundays, with a relative of my father on a tour of Lot’s many cellars. ”

The scent of the cellars, he confesses, has become for him like Proust’s madeleine.

Chambas has a great affection toward French culture and tries to the best of his ability to develop and share it with his American friends, “I even teach them how to play Pétanque!”

Chambas also passed on this heritage to his two children who both work at his side for Aleph wine and share this same passion for wine.

Being French in the United States, Chambas notes, means that you benefit from a certain prestige. His accent from the south of France, for instance, which he qualifies with humor as his “double dose of South,” has always helped him: “it allows me to say things that Americans often would not dare.”

Jean-Pierre Chambas feels at home in South Carolina, yet doesn’t experience the need to set aside or forget his cultural heritage. On the contrary, Chambas feels rather like the “predicator of France’s wine culture.” He likes the South very much and admires this society with its conservative influences, which he considers more structured than in the North, that has welcomed him with open arms.

To him, the United States is still one of the rare places where one can say that if you try, you can succeed. “Americans are hardworking,” he said. “You are not asked who your father is. If you work, you earn a living. If you earn a living, everyone respects you.”

Throughout his experience, Chambas also noted that, contrary to popular belief, the United States is a country that knows how to welcome immigrants wherever they come from.

To the French who have settled in the United States, Jean-Pierre Chambas recommends above all, respect and keeping an open mind toward those that received us.

“Americans, you have to understand them. You have to study them. You have to recognize that when they know something they know it well.” Most important, “you must not expect them to speak French,” rather we are the ones who have to speak English and do our best possible to fit in. Fit in, however, does not mean that you must forget about your own culture, he affirms. On the contrary, you must learn to be generous and share it.