Home > French-American Relations > The Legion of Honor for US veterans > Portrait of a hero > Technician 5th Grade Harold P. McMurran

Born in Dora, Alabama in 1924, Harold P. McMurran kept up with the news and knew that war was eminent. After high school, he was learned to be an aircraft mechanic and tried to get into the U.S. Air Force, but they didn’t accept him. It wasn’t until his draft number came, shortly before his 19th birthday, that he officially joined the U.S. Army. He began active duty on May 28, 1943 and competed training at Camp Shelby in Mississippi where he learned to repair equipment damaged in combat.

McMurran left for the European Theater Operations on February 28, 1944 and arrived in England where he trained for several months on the beaches of Plymouth in preparation for D-Day.

“We were training. We didn’t know anything,” he shared during a telephone conversation from his home in New Market, Alabama. “I don’t think even our commanding officers knew… just that there would be heavy fire.”

On June 6, 1944, McMurran landed with the 546th Company on Utah Beach. It took 3 days of deadly combat before the Allies successfully took over the beach and continued inland, but even then, they had to get through the German hedge groves, which took 6 weeks to get past. With his unit, he crossed several villages which you liberated from the last of the German snipers. 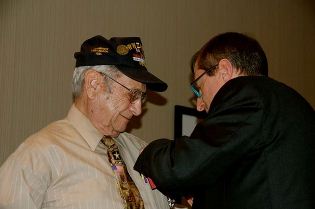 McMurran being decorated with the Legion of Honor. Photo by Rita Richardson.

One of his brighter memories involves General Patton’s desire to get more whiskey for his troops. McMurran was selected to drive an 18-wheel tractor trailer to occupied Bordeaux along with two others to get “Cognac, or whatever it was”. The trio was given extra rations to pay their way out of any trouble they ran into.

Along the way, McMurran ran into trouble. A burnt out bearing brought his trip to a halt, and he had to stop at a nearby house to ask for him. Despite the language barrier between McMurran and the Frenchman, he learned that there was a junkyard down the road where he could get new parts. With dark approaching, the French couple invited him to stay the night. For the first time in a long time he enjoyed a plate of fresh eggs.

“They put me up in their son’s room,”McMurran shared, his voice full of emotion. “He was down in North Africa fighting with the free French.” He never did make it to Bordeaux, though the other two did.

At almost ninety, McMurran owns an aircraft corporation that he still works at, mostly to keep out of the way of his wife of almost 67 years, and he has retired from two other companies, including Boeing. With 3 children, 9 grandchildren and 4 great-grandchildren, he has quite the legacy to show for his life.

When he wears his military hat, which also bears the emblems of the Korean War, it is not uncommon that people pay the bill for him and his wife at restaurants.

Among the many souvenirs and momentos that he has includes a Nazi emblem from a German SS Trooper. The story, now so old it’s lost its magic with the grandkids, is McMurran was responsible for guarding the POW one-on-one. 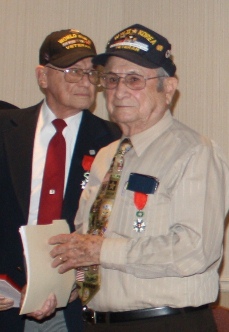 “He lived in American until 1938 and then he was drafted,” he explained of his charge. “Since he spoke English, I told him I wanted his emblem. He refused, so I told him either he could give it to me or I would cut it off him.”

McMurran ended cutting it off him, but no one got hurt.

In regards to the history of the war, he is very well versed, having read several books on the subject.

“Sometimes I disagree, because I was there, and I know what happened,” he stated.

With his first-hand knowledge, he’s been to every school within 20-30 miles of his home, to share with the younger generations the cost of freedom.

He’s not been back to France since the war, nor would he ever return. However, a friend of his went to France last year and brought back some sand from Utah Beach, which McMurran keeps on a shelf in clear view, so he can see it every day.

With the 70th anniversary of D-Day approaching, McMurran is unsure of any activities planned in the Huntsville, Alabama area. “It boggles my mind how the logistics took care of it without a computer… all the tanks, the artillery.”

The thought of the enormity of the campaign silences him for a moment before he continues, “I just knew I had to do my job because if we lost the beach, we lost everything.”