Something is brewing in Georgia. Hours away from a major city, in a Southern town known for golf and strong conservative values, lots of public and private money is going into creating Georgia’s first public National Institutes of Health National Cancer Institute (NCI) within the Georgia Regents University Cancer Center. And at the head of the Experimental Therapeutic Trails Program sits one of France’s most internationally recognized medical oncologists, Olivier Rixe, M.D.

Since 2012, Dr. Rixe has worked in this capacity, lending one-third of his time to clinical research and treatment, one-third to teaching as a Professor of medicine in the Section of Hematology/Oncology, and one-third to strategy and development. Alongside GRU Cancer Center Director, Dr. Samir Khleif, M.D., his mission is to establish a much-needed accredited public NCI in Georgia in the next six to seven years, focusing on prevention, research, and treatment.

Born in Thionville, France to a family of doctors from Corsica and Auvergne, there was little question about the profession he would chose.

“I was attracted to the specialized research [of oncology] and the close connection with the patients. Oncology covers everything.”

He studied medicine at Pierre and Marie Curie University of Paris, France and conducted research at the NCI Medical Oncology Branch in Bethesda, Maryland before earning his medical degree in 1993. After completing four years of training in medical oncology and internal medicine in Paris, he went on to get a PhD in molecular biology at Paris Diderot University in 2002.

Rixe served as senior medical oncologist at the renowned Pitie-Salpetriere Hospital in Paris then later the Phase 1 Unit at Gustave Roussy Institute in Villejuif, France, while teaching medical oncology at Pierre and Marie Curie University as a Professor of Medicine and publishing extensively in various peer-review journals. When the rare opportunity arose for Rixe to practice medicine at the largest cancer center in the world at the National Cancer Institute in Bethesda, Maryland in 2008, it was not more than 2-3 months later that, at the age of 46, he and his family of four children picked up everything and moved to the U.S.

Before landing in Georgia, Rixe worked as Professor of Medicine and Director of the Experimental Therapeutics Program at the University of Cincinnati from 2009-2012, where some of the greatest doctors and biologists came from, including Albert Sabin, founder of the Polio vaccine. 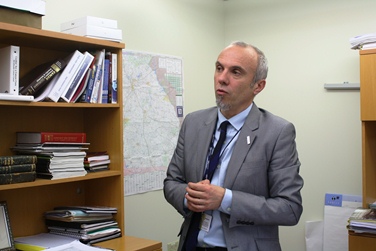 When he learned that his friend, Samir Khleif would be moving to the South to start, at the request of the Governor of Georgia, an NCI, he did not bat an eye. “I’m coming too,” Dr. Khleif remembers Rixe saying. “Now where’s Augusta?”

In a region fraught with poverty, obesity, and sometimes limited access to information for underserved populations there is much work to be done. In less than 18 months, they have structurally accomplished more than they were told they could do in three years.

“Our impact must be lasting. There are three major needs that need to be addressed in Georgia to help with prevention,” explained Rixe. “Obesity, Tobacco, and HPV infection. Education is essential, and since most of life here is done through the church, we are setting up an education program through some of the local churches to reach underserved populations and minorities. We must attack obesity!”

Rixe’s eyes glow with life, passion, and perhaps a little mischief that might manifest itself discreetly from time to time.

“I really like what I’m doing. We’re working on international specialized research in oncology and bench to bedside care, but we’re also here for the poor.” 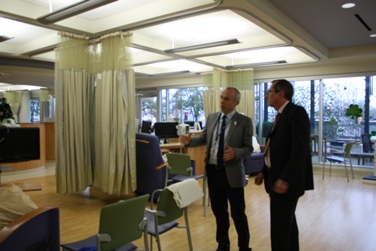 While showing guests around the facility, he paused to greet a family member of a patient with a firm embrace.

“Not only is he hardworking, not only does he produce great research, not only is he in the top of his field, but he’s very compassionate,” boasted Dr. Khleif of his colleague. “That’s why he was first on the list for recruitment.”

“I have outstanding connections with the patients. Very nice, deep connections. You can’t get that in Paris,” Rixe added, who is also excited about becoming an American citizen with his family next year.

For a medical oncologist who gives so much of himself—he loves on his patients and their families with hugs and kind words, regularly attends the funerals of his patients and tenderly barks at his staff to keep away from professional emails during their vacation—finding balance and boundaries is vital.

“I am fascinated by the integral medicine approach [here],” he described. “How do you go beyond medicine? Hypnosis. Acupuncture. Diet. It’s incredible to explore the “medicine man” approach of how to release healing, how to protect oneself and maintain certain boundaries while helping others. This method is so “out of the box” in this country. In fact, the sick have all the power, but they think that it’s the doctor with the power.”

So what method does he use to set up a healthy boundary?

“I do tai chi with the team a couple times a week.”

Fan of the nature that Augusta and Georgia have to offer, one of Rixe’s favourite past-times is to rent the only house on Sapelo Island, far from televisions, phones or cars, with just a view of the sea and a good French book, which he says, “keeps me connected to France.” He also enjoys gathering together with the French community once a month from Augusta, Columbia and Aiken.

The GRU Cancer Center microcrosm of international staff is bringing an important medical and economic need to the state—the NCI is already attracting lots of businesses and jobs to the area. What will Olivier Rixe do at the end of the 6-7 year project when the Georgia NCI finally figures among the other 67 accredited centers in the country? He’s not worried. “I get offers all the time.”