Manuela Bornstein is a small woman with round cheeks, short dark hair and soft mannerisms. At the age of 80, she has spent most of her life in the United States, yet her clear English remains forever accented by her French background. Pouring herself a cup of water—part refrigerated part room temperature to keep the water from being too cold— Bornstein takes a seat at the kitchen table in her Dunwoody home amidst the numerous photos of her family and the beautiful, simple decorations that evoke the “Old World”.

“I don’t understand why my friends say this house looks ‘so French’,” she exclaims, looking around, “Nothing here is French!”

And yet it strangely is. 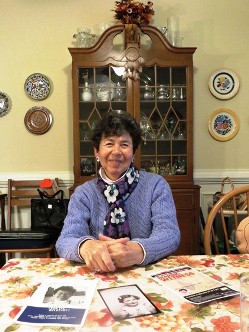 Manuela Bornstein, in her home in Dunwoody.

Freshly retired from a long career as a travel agent, Manuela Bornstein spends her days reading (in French, when possible), participating in the Dunwoody Newcomers Club or activities with her synagogue, and getting exercise at the Jewish Community Center. She attends classes twice a week at Mercer University, and up until recently, she was an active member of the Atlanta Community Orchestra as a violinist.

“I guess I feel more American now,” she responds when asked about her French ties. When her children where younger, she used to go back to France every year to see her parents, but with the passing of her mother in Cannes, her father’s final move to Atlanta ended all familial connections to France. Her two sons, who were born and raised in the U.S., do not really speak their mother’s language, so when the occasion presents itself, Bornstein is thrilled to speak French.

It was a trip to New York in 1960 to see her younger sister that initially brought her to the U.S. At 27, she still lived with her parents in Paris and worked at the American Express Office as a travel agent. At her sister’s urging, Bornstein got a visa to the U.S. for a year. “I loved the United States,” she exclaims, glowing as she recalled her daily picnics with her sister in front of the Seagram Building. “I had the impression of coming from a village, but Paris is not a village! Everything was immense and clean.”

She set off to discover the country and see her long lost cousins in San Francisco with her violin and a backpack. “I was pretty cute,” she described. There, she met her husband, and when her first son was born, her parents joined them in the U.S. for a while. They eventually returned to France, and the Bornstein family ended up in Atlanta in 1976, where her husband helped work on the development of MARTA.

“I was not thrilled with Atlanta. Though I was very good in English, it was difficult to understand the accent, especially men.”

Her husband passed away in 1982, but she remains close to her family, with her two sons, their wives, and her four grandchildren settled in the area. In addition, her younger sister is in Bethesda, Maryland, and they spend time together each year down in Cape Cod.

The story she carries with her

About six or seven years ago, Bornstein visited an event at the William Breman Museum where there was an exposition on children survivors of the Holocaust. It was at that moment that she realized that she had something to offer.

“I never spoke a lot about my past because I was lucky,” she confesses.

Born in Paris in 1933 to immigrate parents from Holland and Germany, Manuela Bornstein’s childhood was marked by the German occupation and the subsequent persecution of the Jews. Thanks to the help of kind neighbors, generous strangers, and a lot of luck, Bornstein’s family was never rounded up for deportation, though they were registered as Jewish at the Mairie and were home during the major deportation operations. Finally, neighbors and members of the resistance helped them escape to the Southwest of France.

“Our friends were marvelous,” says Bornstein of their friends Maurice and Geneviève Paris who, with their teenage son, helped them prepare for their escape. “We’re still in contact.”

For 29 months, Bornstein’s family hid as the only Jewish refugees in a small village in Dordogne. Everyone knew who they were, but no one denounced them, not even a young neighbor, suspected of being in the Resistance who was arrested and detained for five weeks. Perhaps it was the nativity of youth, undoubtedly the over-protective parents had something to do with it, but despite the lack of running water in their home and her father having to hide his displacements to work on a farm, “for us, it was a beautiful adventure,” recalls Bornstein. 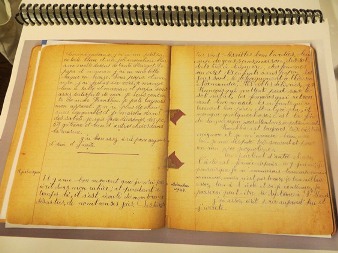 A photocopy of the journal that Bornstein and her parents kept from her birth through the Occupation.

In 1944, the family returned to Paris with its newest member, a baby brother born in 1943. “It was a miracle!” Bornstein exclaims. “We left Paris as a family of four, and we came back as five!” Slowly, they began to rebuild their lives as news trickled in of all of the loved ones they had lost— over 200 members of their extended family. “We lost the entire family.”

The wisdom of age and the gravity of reality weigh on Bornstein, and she tears up as remembering all of the close calls and miraculous evasions of those years. “Without the help of friends, neighbors and the people of the village that hid us, we would not have made it… they protected us. The mayor of the village, the parish priest and the school teachers were especially dedicated. They risked their lives for us! ”

Bornstein pulls out the pamphlets of her speaking engagements at the Breman Museum.

“I mainly speak to school children because it’s easier to tell my story from the point of view that I had.”

She shares with them about the naïve pleasure she had the first time she wore the yellow star, which complemented her bright green knitted jacket, and the first day she wore it to school. Her school teacher told her not to take her coat off, but to stand in front of the class with it on.

“She told the children that they should be nice with me because the Germans wanted to hurt me.”

Through this oral transmission of her story and of the many who risked their lives to ensure hers, Manuela carries on the legacy of preserving memory. “I want the world to know what bad guys can do and what good guys can do.”