From February 19-March 1, the Carrack Modern Art Museum in Durham, North Carolina will open up its original space for a fine art photography exhibition of a local French photographer accompanied by a documentary about the artist by Rodrigo Dorfman, “Monsieur Contraste and The Church of Photography”. Monsieur Contraste, or Jean-Christian Rostagni as he is known to the world, has built a career around the middle ground of opposition, where he proudly blends aesthetics and techniques of two opposing schools of photography.

“I’m interested in many things, often contradictory,” responded this native of the Rhone Valley when asked about how he describes his art. “I have a tendency to say that my work is the result of a marriage between Henri Cartier-Bresson and Edward Weston.” Both considered fathers of modern photography, Cartier-Bresson’s photojournalistic approach is based on the emotions and movement of a moment, whereas Weston’s American school is “technically perfect”.

Jean-Christian Rostagni’s passion for photography began at the age of 15 while on a small cruise ship in the Mediterranean Sea with his mother and soon-to-be step-father. At the time, he had borrowed his dad’s camera, just a “tool for souvenirs”. Yet watching the adults around him, he realized that there was an entire procedure behind photography that perked his curiosity and kindled a passion. 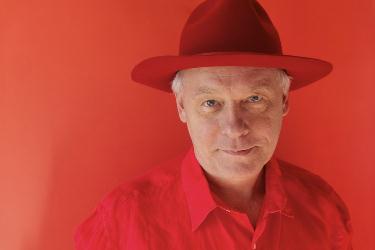 “My step-father was an painter, and I was often surrounded by painters,” explained Rostagni. “I sort of tried it, but I didn’t have the agility in the hands.” Photography gave him the liberty he needed. “As they say, ‘a photographer is a painter who doesn’t know how to draw’”.

Quite talkative and open to sharing about the path that led him to Durham, North Carolina, Rostagni described his experiences studying at photography schools in Paris and Marseille. While in Provence, he met his mentor Denis Brihat, “the living Edward Weston” and began his career as a professional photographer. “[Although] I was educated in the school of Weston, I really like the notion of spontaneity found in the French school. It’s not very common to have this opposing skill.”

Of course, to be ready for that picturesque, ephemeral moment means to always have a camera handy, something that Rostagni’s wife and two teenage daughters must deal with—to their delight and dismay—every day. With little time for hobbies, photography is his work, his hobby, his religion. Travel, falls in somewhere in between. “I really enjoy traveling by car,” he said. “When we travel, my wife usually drives so that I can take photos in the passenger’s seat.” This style of “drive-by shooting” as he described it—which is also the title of one of his series—began while he was in Africa photographing middle class society and continued when he moved to the U.S. shortly thereafter.

Of By For © Jean-Christian Rostagni.

Rostagni had, in fact, never been interested in going to the United States. But that was before he met his wife, Trisha on the streets of Aix-en-Provence, and spent over six years winning her heart—a task that included trips to Chapel Hill, North Carolina where she was a student. More attractive than he had imagined, he found in the college town a rather irresistible side of America. “The U.S. had something to offer that was very enticing,” he shared, justifying the couple’s move from Paris to Chapel Hill in 1993.

Over twenty years later, Rostagni has expanded his network, publishing in Le Monde, Elegant Bride, and Marie-Claire, among others, and giving photography lectures around North Carolina and in France. Though finances have prevented him from returning to France more than a handful of times, he holds ever dear to his French heritage and has developed, in particular, a reputation for his political photography. “I have always worked in and for politics,” he explained, confessing that even if he had not chosen photography as a career, politics or wine could, perhaps, have been a plausible alternative, had he not been of the category of those who are artists “because they can’t be otherwise”. His series, “Life on Mars” (2003-2008) covered the previous presidential administration through the inauguration of President Barak Obama. One of the photos taken at the historical event drew such attention and feedback that, thanks to the support of French Ambassador François Delattre and crowd funding, a print was sent to the White House. 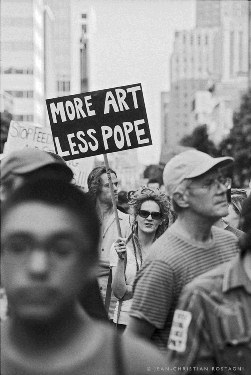 Despite his successes in, what is undeniably, a very difficult business, it still remains a challenge for him to uphold his ideals of fine art photography in the midst of market demand and family obligations. In fact, the premise of “Monsieur Contraste” highlights those issues, contrasting the glory of the art with the reality of responsibility. When his friend, Rodrigo Dorfman approached him about making a short about his life as an artist, Rostagni leaped at the opportunity. “I’d been waiting for ten years [for him to ask me],” he exclaimed.

Indeed, just as “Monsieur Contraste” insinuates, Rostagni is all about opposition and contrast—from school, to content, to the composition itself. “I like to call myself Monsieur Contraste because contrast is essential. It’s everything. Without contrast, the universe is dead. But working with contrast is a critical challenge… on the one hand, contrast is what brings a photograph its vibrancy, but the more contrast you have the more details you lose… and details are what lends the photograph its reality. So my work is to find a balance between realism and expressionism.”

After making its world premiere at the Cucalorus Film Festival in November 2012, Rostagni is thrilled to have nine projections in his local town, alongside an exposition of his work. Furthermore, thanks to a snide remark made by his wife about how he should get a job at Whole Foods, the upscale grocery store has sponsored the production and pushed for the support of local artists such as Rostagni. He is quite hopeful that this venture will boost sales and increase exposure.

As one who classifies himself as a “décilleur professsionel”, which translates into “somebody who professionally forces people to see what they could not or would not want to see,” we can only hope that this “Monsieur Contraste” and its parallel exhibition will help the world to see, at last, the artist and his art.

To learn more about Jean-Christian Rostagni or the film “Monsieur Contraste and the Church of Photography”, visit: http://monsieurcontraste.com/screenings/carrack/ .