Many expatriates who come to the United States don’t expect to stay, but do. Then there are those who know that their time here is limited. Much like life, what they do with the time they are given will dictate the richness of their experience. For Thierry Boutet, there was only one option: he was not going to waste a moment.

Native of the Paris region, it was the four-year work assignment of his wife, Virginie, that brought Boutet and his family to Atlanta in August 2010. His English “was crap” as he put it, but he had a skill, and above that, a passion for one of the most specialized fields out there: art conservation. 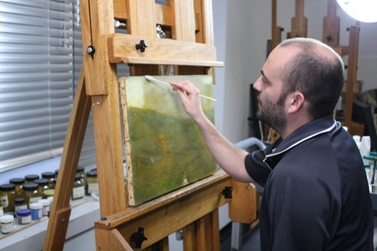 The birth of a passion

Unlike many who enter the profession—of which there are only 1000 conservationists in the whole U.S.A—Thierry Boutet discovered the path relatively late. Born to a working class family, he always loved art and went on to earn a degree in visual art from the Sorbonne. While working at the Louvre Museum in Paris during his doctoral program, his attention moved from studying the work of the masters to wondering about the process of maintaining them for future generations.

“It’s good to work for a painting,” shared Boutet, his brown eyes glowing with intensity as he described the details of his work. “You need to know the essentials of painting to preserve the property. The technical aspect is essential, but you can’t forget that it’s a work of art. You have to be faithful to the idea the painter had when he painted it. Even if the creative aspect has disappeared, there is still a connection to the visual arts and the same reflective process and analysis as with creation: how do you conserve the painting so that it lasts another 80 years?” 80 years, being the normal duration of a restoration.

Door after door opened for Boutet, and his doctoral thesis went unfinished, preferring the more hands-on approach. He did a three-year educational program of paintings and polychrome artifact conservation with the Atelier du Temps Passé; then an internship with the Institut d’Art Conservation et Couleur, working with the top woman in conservation, Mrs. Brans, and finally got a coveted spot with the Atelier Laquèus, where he developed specialized knowledge about the restoration of furniture and arts objects lacquered from China and Japan—something very few people know how to do.

All during his studies, his high school sweetheart was with him. “We met in 9th grade and have been together ever since…17 years.” She helped him through school, and when it came time for him to help her fulfill her own dreams in the Foreign Service there was no hesitation.

“As they say, you have to go out and see the world to know what you have at home.”

With their young son, the couple moved to London, and Boutet soon landed a job with one of London’s top conservationists, working on high profile portraits and paintings. Other jobs followed, which gave him further experience with lacquer work, and then the economic crisis hit, requiring Thierry Boutet to get creative in his approach to employment.

“You have to work at your craft every day. Going to museums, galleries, auctions… otherwise you lose your skill.”

Making it in the Southeast

This tenacious spirit carried Boutet through and proved to be a tremendous asset when the family arrived in the U.S. Southeast.

With portfolio in hand, he knocked on the doors of every museum, gallery, and auction house. “I’ve always done that. [Conservation] is my passion. I live for that. But I had a warmer welcome here. Americans give you a real chance…....”

“He kept coming by, but didn’t really push us,” said Michelle Savant, Conservator of Objects at the Atlanta Art Conservation Center, who had taken a break from her work to join in on the conversation and give her colleague some support. “It was always, ‘The little French guy came by again’. Then one day he came and didn’t even ask about a job. He just sat, watching me work and chatting away. When he left I asked Larry [Shutts, Conservator of Paintings], ‘there’s gotta be a way to keep this guy’.” 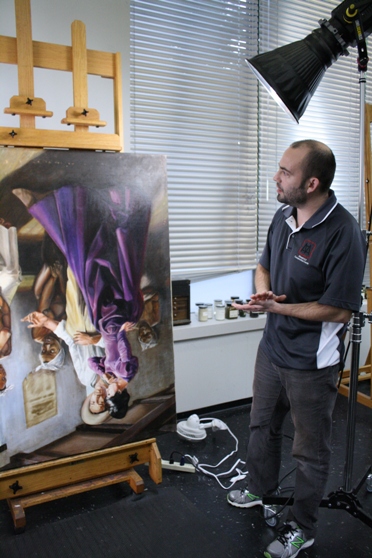 Incidentally, around this time, the Atlanta Art Conservation Center had just landed a major project restoring the famous Talledga College murals, “Amistad” by Hale Woodruff before they began a three-year tour to museums around the country. Restoring these huge murals for the first time ever was a major undertaking that required extra help. Boutet’s part time work quickly escalated to extra hours. So engrossed in his work, he’d often forget to eat lunch. His colleagues were impressed with his rapidity and precision, and soon he was taken on full time as Assistant Conservator of Paintings.

Fitting in and moving on

In this capacity, Boutet has had a very rich encounter with the U.S. Southeast, having the opportunity to exchange with many of the public and private collectors of the region. “It’s very gratifying work. Especially here in the South were people are so friendly and tactile. For me, the salary is in the smile.” Boutet confesses, of course that the “French touch” doesn’t hurt in his interactions with Southerners. “Once, I was even invited over for homemade scotch in Alabama as a thank you.”

Now in their final year in Atlanta, Thierry Boutet and his family have made a comfortable niche for themselves. Family is top priority, and so Thierry and his wife make sure that their son, Dorian is well-adjusted and well-connected to friends and family in France. With the same tenacity and analysis that he applies to his work, Boutet researched schools for Dorian to ensure the best education possible, supplemented with the French scholastic offerings of the Ecole du Samedi. In addition to experiencing all of the sights and sounds that Atlanta has to offer, Thierry still takes time to do art on his own, and is pleased to see that his son loves it too.

As with any job in the Foreign Service, the family will soon be moving to their next location. Ever mindful of their son’s education, Boutet and his wife hope to be stationed in Europe to be close to family or an English-speaking country to solidify Dorian’s unaccented English. Naturally, having landed the job at the Center, it’s hard to let go. “If I could take anything with me, I would pack these two in my suitcase,” said Boutet, pointing to his two colleagues who clearly are not happy at the thought of the Boutet family leaving.

“Where will we find another French guy to crack jokes with?” lamented Savant.

What advice does Thierry Boutet have for newcomers? “When you know you’re only here for a limited time, you’ve got no time to lose. Don’t hesitate to meet people. Go on site. Do your homework on the people you’re dealing with. Provoke the encounter and don’t let go.”

A good word of wisdom from someone who knows what he’s talking about.