January 2011. Atlanta awakens in a Winter Wonderland. Several centimeters of ice cover the city and its surroundings. The entire region is paralyzed. All? No. In Sandy Springs, the family of Claire Berger, used to the Alps, pull out their skis, boots, and poles. Even if no one can go to work, getting food is still essential. With her whole family, Claire Berger weaves through the streets to the one grocery store that is open just two hours a day and, with backpacks in tow, stocks up food for her neighbors.

The Berger family—tri-cultural with a French culture, a Serbian husband, and settled for ten years in the United States—is today well-integrated in the big city of Atlanta, “the city under the forest” as Claire describes it. 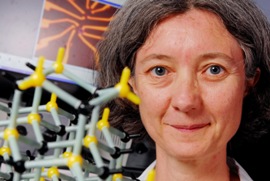 Claire Berger is a physicist. As a child, she played with Legos, so when one of her teachers predicted that more than half of the materials of the 2000s would remain to be discovered, she became enthralled with the exploration of fields combining observation and creation. Her thesis in Grenoble was the first in France on “quasi-crystals”, crystals declared non-existent by 20th century orthodox theories of science.

In physics, like in life, we must move forward. When her husband, Branislav, an engineer at Hewlett-Packard in Grenoble was offered a job in Atlanta, the family didn’t hesitate. The CNRS where she worked enabled job-mobility, so everyone moved to Atlanta. Even if the family has chosen to integrate, Claire remains very attached to France and to her children conserving the culture. Thus, her children attend a local school, follow French classes with CNED and regularly visit France. They’re well-adjusted here, all the while maintaining the feeling of being French.

Claire quickly joined the pioneering team at Georgia Tech led by Professor Walt De Herr, which is at the forefront in studies on grapheme. Graphene?! There’s no point in retaining the word: the revolution that this little slip of pure carbon will provoke in our lives will be to the same effect as was the “transistor”. This research is carried out in close and permanent collaboration with France and, in particular, within the framework of a Partner University Fund (PUF) that associates Georgia Tech to several research institutes in France, most notably to the CNRS. These partnerships enable the exchange of researchers (students or professors) between our two nations.

Claire is also a soprano and member of the Atlanta Master Chorale that carefully selects its singers of sacred music. In 2013, the ensemble won the prestigious “Margaret Hillis Award for Choral Excellence”. Her parents met in a choir in Clermont-Ferrand. Traditions are very important, so much so that the entire family is musical and plays various instruments.

For Claire Berger, music, science, family, Atlanta, and her university—whose welcome she praises—make up the components of a productive union. In her eyes, the world is a permanent creation and humans are co-creators, as much as for scientific innovation as for artistic creation and the family life. This vision, in harmony with her role as a mother, which is also about ensuring the continuum of creation, is what brings her joy and gives meaning to her existence, to all existence.

Claire Berger remembers her childhood discovery that "the world is subject to mathematics." In this way, she builds more or less on the paradigm of the founding father of the modern science, Galileo, explaining that math gives the grid to interpret the phenomena that surround us by providing constitutional unity. For Claire, who traces her career as a scientist back to her chemist grandfather, physics, music, and permanent creation where humans are actors and designers—these all contribute to the wonder which always us moves forward.