Accueil > French presence in the US Southeast > Honored French citizens > Christof Veillon : man of many passions

Christof Veillon : man of many passions 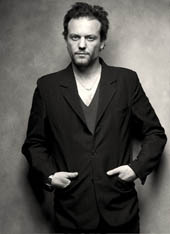 It was never in the plans for Christof Veillon to settle in the U.S., much less pursue an acting career. In fact, his interest in the craft developed relatively late as a teenager, who used to spend his free-time watching movies with his buddies. Raised in a family that did not place great importance on culture and the arts, it was his French teacher in high school who first introduced him to the world of acting beyond the cinema. In preparation for the French Baccalaureate, this exceptional and astute teacher took his class to the rehearsal and performance of L’Ile des esclaves by Pierre de Marivaux. Never before had Veillon been exposed to the fun and magic of the theatre, and from then on the decision was made.

He left his hometown near Lyon and headed to Paris to study acting at the Ecole Florent, where at 19, he performed for the first time on stage. He went on to perform at prestigious venues in France such as the Comédie Française and the Théâtre de la Ville de Paris as well as in Italy, Austria, and Slovakia. In addition, he played in several TV movies, independent films, and in a series of radio plays on the national radio, France Culture.

Thanks to a director with whom he had worked with on several projects, he was introduced to the new passion of his life— a young American student working on the translation of one of Koltès’ plays in conjunction with the U.S. Koltès Project in Atlanta. Veillon wined and dined her, and as he proudly shared, his future wife fell in love with him over a plate of his homemade ratatouille. The two married, and in 2010, he moved to Atlanta where his bride, Jennifer was finishing her PhD at Emory University and taking on a new job at Georgia Tech.

What struck Veillon upon his initial arrival to Atlanta was the spectacular aerial view of this city in the middle of the forest—a sight “that doesn’t exist in Europe”. Avid reader, film-goer, and nature-lover, he was also very impressed by the diversity and creative energy. “Atlanta gives off the vibe of being a place to create, change, propose new things, and that’s a very nice feeling. I lived in Paris for 20 years, and it was more difficult. We had the feeling—even if it was false—that everything had already been done,” said Veillon.

As many expatriates who have settled in the U.S. for love rather than work know, it is not necessarily easy to build a career from the ground up on foreign soil, yet Veillon has wasted no time in building his network and getting work. The Théâtre du Rêve (TdR), Atlanta’s own French-speaking professional theatre company with whom he had worked in Paris several years back, offered a wonderful opportunity for him to immediately jump in the water and make contacts in his field. He has played in several of the TdR productions and has also directed and performed a tribute to the famous French singer Serge Gainsbourg at the Alliance Française d’Atlanta. In addition, he’s been the lead in two independent films and recently played in the last James Wan’s feature film, “The Conjuring”. One might assume that as an actor, Veillon would have no problem mastering the English language, and from what he demonstrates on the stage and the screen, that is certainly true, but little does one known about the effort, focus, and practice that goes into perfecting his American articulation and pronunciation.

“When I arrived, I hardly spoke English,” Veillon confided. Although his wife is American, they only speak French at the house, especially since they became parents five months ago. In preparation for his audition with a booking agent, he arrived half an hour early in order to get the script, and then hid in his car to practice the pronunciation with his wife over the phone. Veillon’s skills paid off, and he now has an agent to help him land roles in this city that is quickly becoming an important player in the entertainment industry.

“It’s a bit precarious for artists [in the U.S]. In France, we have structures in place to protect them, but I really feel like I’m in the right place at the right time,” shared Veillon.

As he strives for the stars, Veillon remains focused on the local community and creative opportunities available. He’s very excited about a French-English acting class that he began teaching recently with the TdR for children—many of whom come from the local French community—as well as the upcoming class for adults this fall. In addition, Veillon is planning a series of small theatrical presentations within the framework of TdR based on and presented in conjunction with the High Museum’s fall exhibition on the Jardin des Tuileries. He is also very conscious of his new role as a father, and with that the new dimension that the future takes on. His daughter, June Marguerite, has become Veillon’s newest and most precious passion, and as he looks into the unknown future full of possibilities, her happiness is at the center, and everything else will, like always, fall into place.