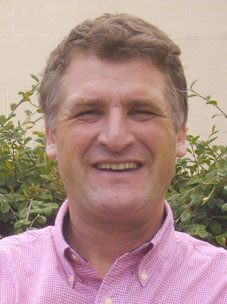 Flying airplanes, sailing the Eastern coasts, working on certifications that affect civil air space throughout the world— Eric Feron sounds more like some Marvel comic super hero (just check out his homonym’s wikipedia webpage : http://en.wikipedia.org/wiki/Feron if you don’t believe us !) than an absent-minded professor, prone to forget appointments or bury himself in a lab. Indeed this Georgia Tech professor of aerospace software engineering has a very diverse range of activities and research on his plate.

Born in Paris, Eric Feron has spent exactly half of his life in the United States. Upon completion of his Computer Science Master Degree at the Ecole Polytechnique & Ecole Normale Supérieure, Feron headed out west in search of ideas and adventure. For someone interested in automation, the U.S. was a great place to further his education, which he did at Sanford University, where he completed his PhD in Aerospace Engineering. After marrying his French sweetheart halfway through his doctoral program, the original plan was to return to France. Yet what does a young doctoral candidate do when his dissertation-directing professor helps him land a tenure-track position at MIT ? He takes it ! For the next twelve years, his family and career flourished in Boston despite the snow and slush of the harsh New England winters.

When speaking about his students, it is clear that Feron is as passionate about teaching as he is about his research which focuses on System Guidance and Control, optimization with applications to autonomous aerial vehicles, air transportation systems and embedded software. Proud of their work ethic, passion, and achievements, he explained that what makes them unique is that they are all passionate about their speciality and whatever it was that led them to study aeronautic engineering—usually flying. While at MIT, he was teaching a course on the way airplanes fly, knowing full well that he had students in the class who were already F-18 pilots. “How does one theoretically teach about flying without experience to back it up ?” The best way to remedy that, and therefore to improve his knowledge of aeronautics—was to get his pilot’s license as part of his “continuing education”. Sadly, Feron doesn’t fly that much these days. Not only is he very busy working on problems of certification for autonomous aerial vehicles, but he also has three children.

In 2005, Georgia Tech successfully lured Feron away from the Ivy League school, enabling him to develop a research program in technology. As Feron put it, “Each university has its own personality. MIT has excellent relations with the business world. Georgia Tech enabled me to focus more on my research”. As one who adapts to the local and business context to best contribute to society and academia, Feron has put greater focus on problems of software certification regarding civil airspace—a field that needs to be normalized internationally. “As soon as you speak about civil airspace, it’s immediately an international topic. There is a lot of collaboration going on, and we can do a lot of great things.”

The transition to the U.S. Southeast has proved quite positive for the Feron family, who loves to travel and discover different cultures and new ways of thinking. Atlanta is not only a major airport hub, but it is also the sister-city of Toulouse, home of Airbus and the aviation center of France. What could be better for this aviation engineer who makes frequent trips between the two cities to further collaborations between interested parties and to offer his expertise as a Consulting Professor for the Ecole Nationale de l’Aviation Civile in addition to his work at Georgia Tech ?

He chuckled as he shared about the hidden surprise of Atlanta. “Many French [people] don’t know about Atlanta. They said, ‘What are you going to do over there ?’ And I would reply, ‘I’m going to visit the Louvre !’” “Atlanta is a very international city, as much as Boston or Stanford, if not more so,” Feron continued. “You can feel that it’s a city that is growing in every direction. Like Toulouse, it has a particular ambiance about it and has an important role to play as a regional capital in a rural surrounding.”

This urban oasis offers Feron the opportunity to feed his love of music—at the symphony, the opera, or the ballet—and with the great weather, it is not uncommon to see him riding his bike to work—something that wasn’t possible in Boston. In addition, Feron loves that Atlanta is “only a 15 hour drive to the tropics”—a big advantage for this family that has already sailed all around the East coast and Florida.

Ask his students or his colleagues, and they will agree that Feron lives up to his life statement, “Act silly whenever possible. Work hard whenever necessary.” In this way, he can keep things light yet structured. Also, as Feron noted, one of the joys of being caught between two cultures is that this status allows for some socially awkward behavior that can always be blamed on the other culture ! Super-smart, with a sharp sense of humor and humble… Wow, Eric Feron is, indeed, a new kind of “super hero” for the French.