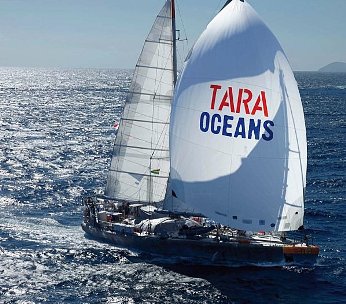 The exploration schooner Tara stopped in Savannah, Georgia, January 20 to 26, 2012 before its departure for New York and for two new scientific stations, including one in the warm Gulf Stream. The expedition, named Tara Oceans, started in September 2009 in Lorient and is the first attempt to study the global marine plankton, a huge ecosystem, to better understand the impact of global warming and its influence on climate variations.

Savannah gave a warm welcome to the schooner Tara and its crew. Accompanied by a fleet of research, commercial and recreational vessels, Tara entered the port of Savannah with the sound of the shots being fired from Fort Jackson and Fort Pulaski, symbolic places of battles of the Union during the American Civil War.The crew was then received by the Consul General in Atlanta during a reception at the Savannah Technical College attended by the Mayor, the City Council and scientists from Skidaway Institute of Oceanography, NOAA (National Oceanic and Atmospheric Administration) and Georgia Tech.

A program of events for the general public, especially children, exposed the scientific objectives of the international and interdisciplinary mission that is Tara Oceans. Tours of the schooner were organized over three days, allowing students in the counties of Chatham, Effingham and Bryan (total of 360 students) to learn about the techniques and technologies used for the study of marine micro-organisms and ecosystems reefs. A reception hosted by the Alliance Francaise of Savannah was held on Sunday evening.

Two scientific seminars were initiated by the scientific service of the Consulate general of France in Atlanta. The Skidaway Institute of Oceanography scientists welcomed Tara Oceans with the presence of oceanographers, biologists and engineers from Gray’s Reef National Marine Sanctuary, NOAA, Georgia State University, Georgia Tech and the Shellfish Research Laboratory at the University of Georgia Athens (UGA).At Savannah State University, Lars Stemmann, Head of Tara Mission of the Oceanographic Observatory of the University Pierre and Marie Curie in Villefranche sur Mer, and Daniele Iudicone, a researcher at the Stazione Zoologica Anton Dohrn of Naples, were documenting the biogeographic observations already recorded and detailing the methodology for bioinformatic sampling used to collect the plankton data.

Tara’s call received abundant media coverage through twenty press articles. This allowed the participation of a large audience to visit the ship and scientific events. The images of the call can be viewed at: http://www.consulfrance-atlanta.org/spip.php?article3273&var_mode=calcul