The event "France-Atlanta: Together Towards Innovation" held from November 29 to December 12, 2010 at the initiative of the Consulate General of France in Atlanta and the Georgia Institute of Technology (GT), celebrated twenty years of the GT Lorraine campus, the only U.S. campus on French soil, and announced, officially, the creation of the Lafayette Insitute, incubator and platform for research and technological applications in Metz, a partner at the Joint International Unit (IMU / CNRS) in the presence of delegations from Lorraine (Dominique Gros, Mayor of Metz, Jean-Luc Bohl, president of Metropole Metz, Jean-Yves Le Déaut, senior vice president of the Lorraine region, Francois Lavergne, Vice-Chairman of General Council of Moselle).

For this first edition of France-Atlanta, four prestigious scientific institutions in Atlanta (Centers for Disease Control and Prevention, GT, Emory University, St. Joseph Hospital) were chosen to organize scientific events whose objectives were to:

initialize academic cooperation and research in scientific fields where France and the southeastern United States share a common scientific excellence;

encourage partnerships between universities and entrepreneurships. These objectives were achieved for both symposia, as discussed below.

Four workshops, coordinated by Abdullah Ougazzaden articulating these themes and animated by researchers INSIS / CNRS, UMI / Metz and laboratories of GT led to the identification of concrete projects to be developed in coordination with the UMI Georgia Tech Lorraine. This symposium brought together researchers, students and Franco-American EntrepreneursThe symposium, a scientific quality, has led to the first result obtained shortly after: a contract of € 1.5 million over 3 years, signed with the French company SILSEF, presented at the symposium, and the IMU for his research in optoelectronics.

The symposium brought together practitioners, surgeons and biologists from the St. Joseph Hospital in Atlanta and the University Heart Hospital of Toulouse-Rangueil. He attracted a very large audience (230 people) and permitted exchanges of high quality in interventional cardiology, transplant immunology, molecular genetics and epidemiology. Founded in 1880, the St. Joseph Hospital is one of the best public health facilities in Georgia, known for its emergency care system and its innovative capacity in cardiac and vascular surgery.

The symposium has received widespread coverage in the local press. It placed emphasis on innovative techniques of surgical intervention cardiology, guided imagery and embedded electronics. A meeting back in France is in preparation for fall 2011, by present French researchers and co-organizing team led by Dr. Nicholas Chronos, president / CEO of St. Joseph’s Translational Research Institute and Dr. Spencer B. King, President of Heart and Vascular Institute.

Co-organized by Scientific Attaché, Dr. H. Fadlo Khuri, head of hematology and medical oncology and Deputy Director of the Winship Cancer Institute at Emory University and Dr. Jacques Galipeau, an expert in regenerative medicine, the symposium was to initiate a first meeting between researchers of the Winship Cancer Institute of Emory University and French researchers (oncologists, biologists and experts in nano-biotechnology). He collected six French researchers including Jean-Marc Egly, member of the Academy of Sciences and science adviser Andre Syrota, President and CEO of INSERM as well as fifteen U.S. researchers with assistance that has remained around 150 people during the two-day seminar.

Transatlantic cooperation between the two communities of researchers recognized for their outstanding work in oncology and will continue to be developed with the symposium in France in 2011.http://www.latitudefrance.org/Symposium-franco-americain-sur-le.html 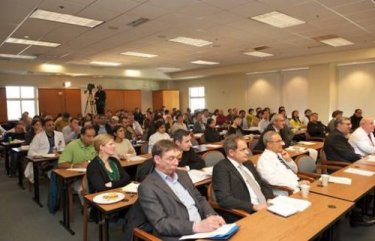 Many foundations, agencies, institutions, often partners involved in international public health programs were united for the organization of Haiti 2020, including the Centers for Disease Control and Prevention (CDC) which is the primary U.S. government agency in public health surveillance and health security and the Emory Global Health Institute (EGHI) that determines and supports actions and initiatives in public health in developing countries.

After an introduction of their director, Dr. Kevin M. De Cock, devoted to the reconstruction efforts of the public health system in Haiti, Jean-Louis Durand-Drouhin, scientific advisor to the Interministerial Mission for the Reconstruction of Haiti (Mirha) and collaborator Pierre Duquesne, Ambassador in charge of economic reconstruction and development (DGMDP), Ministry of Foreign and European Affairs, presented the four French initiatives to rebuild the Haitian public health system (organization of public health system; reform of health policy at national, departmental and local establishment of a social security hospital infrastructure, medical and paramedical training). 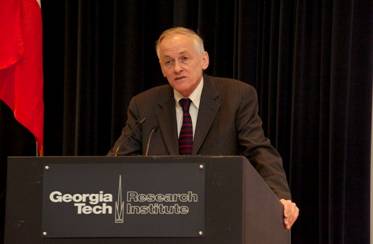 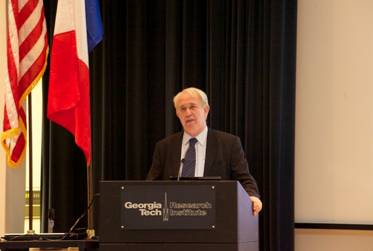