The Epicurean Dream of Cyril Blacha 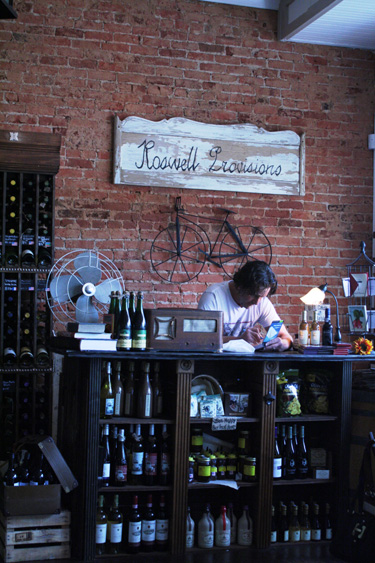 It was a temporarily paralyzing accident on his way to Paris to become a tax inspector that propelled westward Mr. Cyril Blacha. Inspired to see the world and live life to the fullest, this native of Provence picked up and moved to the bright, tropical island of Saint Barthélemy in the French Antilles, where he worked in the hospitality industry until the island got too small for him. Then when in 1999 a friend and fellow countryman living in the States invited him to help run a recently opened French restaurant, he agreed. That’s how Cyril Blacha arrived in Atlanta and then Roswell, back when there were only 3 restaurants on Canton Street.

During his first six months here, he travelled along the east coast, visiting beautiful and historic locations like Charleston and Savannah, but it was Roswell that captured his heart. With its parks and markets, small streets, and now over 16 restaurants, cafés, and terraces, the European feel has made this Frenchman feel quite at home. Of course, it helped that one day, while working at the restaurant, a beautiful American caught his eye, and it was mutually love at first sight. They got married, started a family, and settled down.

After several years helping at his friend’s restaurant, Cyril Blacha went on to help his wife, Kelly run her own just up the street, Party Chic, which has been delighting customers for the last three years. It was during a trip together to Southern France that Kelly had the idea to open a little market like the many quite shops found in Europe, so when the opportunity presented itself to occupy the space under Party Chic, Roswell Provisions was born.

Opened in September 2011, Roswell Provisions, a charming épicerie fine, offers a time warp experience to yesteryear and an assortment of French and European-type gourmet products that cannot be easily found elsewhere. Passersby and windows shoppers can’t help but wander into this magical market to admire the vintage décor, sit down with a fresh pastry and a cappuccino brewed at the espresso bar, or pick up the evening’s meal. For those with a more refined pallet, or perhaps just a little homesick for European cuisine, the shop proposes fresh pastries and artisanal bread, local, organic vegetables, fine European meats, fresh pasta, and over 100 fresh cheeses—cut to order in front of the customer. In addition, the market offers a selection of 200 wines.

But what makes this shop truly remarkable is the human, family touch. Cyril Blacha tastes and approves every product—if he doesn’t like it, he won’t sell it. His mother, who still lives in Cannes, makes the burlap sacks used in packaging and sends shipments every couple of weeks of fresh herbes de provence, directly from Provence, which the shop uses to infuse the olive oils for sale. His wife handles the creative ideas and decorations, from the delicious, gourmet cupcakes to the popsicle-stick price tags. And of course, their three boys—ages 7, 13, and 15—all delight in coming to the shop after school, grabbing a croissant or some candies from the candy jar and sitting down to do their homework. This goes for Cyril Blacha, too, who admits that one of his favorite aspects of the business is to go around the market in the evening, grabbing a little cheese here, a boudin blanc aux truffes there, and maybe some wine on his way out.

Through his work in Roswell, Cyril Blacha has found the perfect balance between two very different worlds: the simplicity and fine living of Southern France frozen in time on the one hand, and the fast-paced, customer-oriented entrepreneurial society of the U.S that he appreciates on the other. Though he seldom has time these days to enjoy his passion for bike-riding, Cyril Blacha, who has truly found his niche in this Georgian city, can’t imagine himself anywhere else; and with his sister and her family also in the U.S., his wife and children by his side, and his mother planning to one day join them, why should he try?