Georgia Tech and France Plan the Future of Graphene

From the article published on Georgia Tech website: http://www.cos.gatech.edu/news/Georgia-Tech-and-France-Plan-the-Future-of-Graphene

For the second year in a row, Georgia Tech has partnered with the Consulate General of France for a series of talks, entitled “France-Atlanta 2011 – Together Toward Innovation.” The discussions explore the fields of science, art, humanitarian work, economics, architecture and nuclear energy. In one of the talks scientists gathered together to discuss the state of current research in graphene and how to create future partnerships on both sides of the Atlantic.

The graphene symposium started last year when the French Consulate approached Claire Berger, the director of research at the Néel Institute at the Centre National de la Recherche Scientifique (CNRS) in France and a research scientist in the Epitaxial Graphene Lab led by physics professor Walt de Heer. They wanted to explore current and potential collaborations in graphene, an allotrope of carbon found in sheets only one-atom thick.

“Since de Heer had the first insight into graphene in 2001, the first patent on the material in 2003 followed by the first paper the following year, it was a natural fit.,” said Berger.

Why explore graphene and not another area of science? The answer has to do with the limits of silicon, said de Heer, also director of the graphene Interdisciplinary Research Group at the Materials Research Science and Engineering Center (MRSEC).

“Silicon is reaching some fundamental limits in terms of speed and heat generation,” explained de Heer. “There’s a huge issue with dissipating heat generated in silicon devices, graphene is much better at dissipating heat. While graphene will not replace silicon in most applications, it will be very good for high-speed devices.”

It’s too early to pinpoint what exactly these uses might be, as they haven’t been invented yet, but as often happens with technology, scientists discover the science behind something and then they come up with uses for it.

During the symposium at Tech “Graphene: Taking Electronics Beyond Silicon”, held on October 28, a group of scientists, students and citizens heard from a range of speakers on the science of graphene and ways to increase collaborations between researchers in Atlanta and in France.

“What we’re trying to do is to put people in for a complementary approach, so that we can use each other’s capabilities to do things that we cannot do in our own institution. For example, we have fantastic access to the synchrotron in France. We have up to two weeks of experimental use per year and we have access to the high magnetic field lab with experts in Grenoble,” said Berger.

Currently, de Heer and Berger are working with Albert Fert, Nobel Laureate, who shared the 2007 prize in physics for his discovery of giant magnetoresistance - the phenomenon that allows the construction of large hard drives capable of fitting in smartphones. Their work involves using Fert’s knowledge of the spin of electrons, known as spintronics, and applying it to graphene. 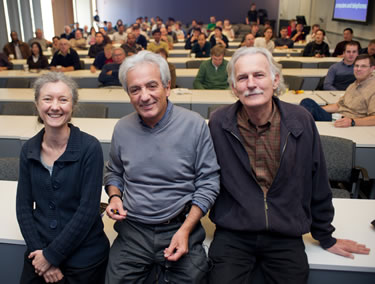 “Everything we currently do in electronics is based on charge, but the other characteristic of electrons, which is the transport of the electron’s spin polarization, maybe be important in the future,” said Berger. “It’s a new concept that, while it hasn’t worked well with metals and semiconductors, it has been promising in carbon nanotubes. Graphene seems to be even more promising.”

Berger explained that with metals and semiconductors it’s been very difficult to keep the spin polarization constant. But because graphene is made from carbon, the carbon allows it to preserve the spin over longer distances.

“We also know how to make very narrow ribbons of graphene that have specificities such that no one else in the world can make,” said Berger.

Usually electron transport in narrow ribbons is impeded by the roughness of the edges, she said. “In our case the edges of the ribbon are special, because they perform well at very high temperatures. They are also extremely smooth, which makes the transport unimpeded.”

In addition, the Epitaxial Graphene Lab is seeking to understand the interaction that graphene has with its substrate, added Berger. The opening address of the symposium was delivered by Pascal Le Deunff, consul-general of France in Atlanta, followed by Steven McLaughlin, vice-provost for international initiatives at Georgia Tech, setting the stage for a fruitful collaboration.

During the meeting attendees learned the details about de Heer’s work and heard a talk by Robert Haddon from the University of California-Riverside about advances in graphene chemistry. In addition, Fert talked about his work in spintronics, while Amina Taleb-Ibrahimi, from CNRS Synchrotron Soleil, discussed opportunities for surface science in graphene.

Later in the day, Berger and Jean Favero, director of the CNRS Office for United States, Canada and Mexico, talked about international programs in France as well as future European graphene projects, while Bernard Kippelen, from the Center for Organic Photonics and Electronics at Tech, covered the field of carbon-based optoelectronics.

Near the end of the program three directors from the National Science Foundation (NSF) – David Stoner, Janice Hicks and Tom Rieker – talked to the audience about how to use NSF funding to make their dreams come true.

“When you talk about research dollars for these collaborations, things get a little fuzzy. When you talk about supporting students, the next generation of scientists and engineers, then people think more carefully about allocating resources to them because they are the future of both of our countries,” said Dennis Hess, director of the MRSEC Center and professor of Chemical and Biomolecular Engineering at Georgia Tech.

Currently, Georgia Tech is able to send students to France, but it’s more difficult to get the French students to Tech, added Hess. In a new three-year France-U.S. partnership on graphene, sponsored by the French Embassy in Washington, D.C., travel money will be made available for students, post docs and faculty to work for extended periods of time at partner institutions on both sides of the Atlantic.