Home > French presence in the US Southeast > Honored French citizens > Soraya Rouchdi, an ambassador for sharing culture and languages to young (...)

Soraya Rouchdi, an ambassador for sharing culture and languages to young children 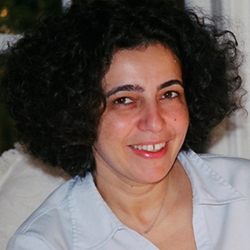 Soraya Rouchdi is a true “intellectual nomad.” This is how she describes herself. This means a woman always ready to go around the world to seize interesting opportunities, with a huge desire to learn new languages and discover new cultures. These are the qualities she acquired during her travels in Tunisia, France, Italy and the United States. Now she wants to transmit this to her students of the Little Da Vinci International School, a bilingual pre-school she founded in Atlanta.

After having lived in Tunis during her childhood, she left her family to study finance and marketing in France, at EDHEC Business School and Lille III University. This first voyage taught her to be open to new experiences. The differences between cultures showed her that beyond countries, there are certain common, universal values, a belief she has maintained during her entire international career.

After working in Fleming Finance Holding in Paris, she left once again, this time to Italy, where she learned Italian in three months. “I don’t have any special gift,” she explains, “but for the first time, I understood how lucky I was to have grown up in a bilingual environment.”

After working for Alhstrom Paper Group, her next was a trip to the United States. Moving from Europe to Atlanta has been a shock, she says, “But through sheer force of will, in making an effort to see what is positive in each thing, to know American people and their culture, you discover wonderful people. Here, business-mind is praised by everybody. People are able to give you self-confidence, to make you want to progress, and newcomers are so easily intergrated,” adds Soraya Rouchdi. This is thanks to her project in Atlanta - the Little Da Vinci International School – which opened in spite of a bad economic situation in the country.

This project of creating a pre-school based on the model of the French “école maternelle”, with bilingual classes (English, French or Spanish) is based on her personal experiences as a mother. She had a wonderful experience with the “école maternelle” in France with her first two children and she found herself wishing that she could find such a service in Atlanta for her third child. She had also decided to teach them French in a methodical but still captivating way.

This is the challenge on which she wanted to base the Little Da Vinci International School. Soraya Rouchdi tries to interest each child in what he is learning through his or her own passions, and she wants to combine the solid academic and creative French approach with the optimist American approach and their interest in developing a child’s personality. “This ‘yes, we can!’, the fact they are so sure to achieve what they want has always fascinated me,” she says.

What would Soraya Rouchdi like to transmit above all to her students? The desire to share her love for learning and the interest in other languages and cultures. What she has learned from her extensive travels is that being curious and meeting different people is what really makes you open-minded, which is the best tool you can give to children to prepare them for the world of tomorrow. “My strength is trying to speak the language of each one” she says, and this is what explains why so many parents have been won over to her teaching project.

Her future objectives are as much personal as professional. Regarding the school, the emerging success has to be consolidated, in interaction with other schools in Atlanta. New bilingual classes should be opened, in Madarin and even maybe German, and classes for older pupils could be created. Soraya Rouchdi would also like to play tennis and music again, because she always has thirst for knowledge. She already speaks four languages fluently but now she wants to learn Spanish!

The question that comes to my mind—does Soraya Rouchdi want to move again? “I want rather to gather my family” she answers. Her two older children are in France, (to get international experience), but she has the three nationalities, and feels like she belongs to the three different countries the same way, and keeps all doors open: “For sure a travel is always uprooting, but what you acquire there is priceless. This is what I want to impart to my children.” Thanks to this mix of cultures, going away does not scare her.