Our underwater heritage holds many treasures. For centuries, thousands of shipwrecks and their precious cargoes have lain undisturbed at the bottom of the sea. French archaeologists from the Department of Underwater and Marine Archaeological Research are recognized internationally and are involved in exploration in every sea on the planet. Their mission is to provide expert assessment, to make an inventory of marine cultural property and to ensure its protection. 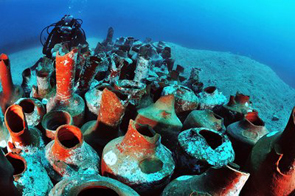 The oceans that cover a large percentage of our planet still hold many secrets. “France has the world’s second-largest maritime territory. It has a little over 11 million km2 of EEZ (Exclusive Economic Zone), nearly as much as the United States. And it is estimated that this maritime area includes between 150,000 and 200,000 undersea sites,” explains Michel L’Hour, cultural heritage curator and director of DRASSM (Department of Underwater and Marine Archaeological Research).

Set up by André Malraux in 1966, DRASSM was the first body in the world devoted to submerged archaeological research. Originally conceived as a tool for expanding France’s influence across the world, it is responsible for studying and protecting marine archaeological heritage, especially from the plundering of wrecks. Now the world leader in the undersea archaeology sector, carrying out research, advisory and assessment missions in all the seas of the globe, DRASSM is on the technological cutting edge.

The DRASSM archaeologists are called upon to work in many countries. They direct or advise major operations. They took part in the research on the French frigates, the Astrolabe and the Boussole, which foundered off the Archipelago of Vanikoro (Solomon Islands) in the South Pacific in 1788, lifting a veil on the mystery of the disappearance of La Pérouse, the famous French naval captain in charge of the expedition. “What news of La Pérouse?”, Louis XVI was still asking shortly before his execution in January 1793. The exhibition that followed the work of experts from DRASSM, held at the National Maritime Museum in Paris in 2008, attracted over 200,000 visitors in six months.

Partnerships have been forged with Italy, Egypt, Pakistan and others. In 1985 the wreck of a large merchant ship built in Europe, loaded in Asia and lost in Africa was found in the Gulf of Guinea. A study carried out by the DRASSM enabled the wreck to be identified as the Mauritius, a ship of the Dutch East India Company, which ran aground off Gabon in 1609.

“We have to meet a strong international demand. One of our areas of operation consists of intervening in relation to the right to fly the flag – the nationality of the wreck. We have obtained two Franco-American agreements in relation to this,” points out Michel L’Hour. La Belle, which disappeared in 1686, was discovered off Texas, in the Gulf of Mexico. The research, in which specialists from the DRASSM took part, enabled the American authorities to recognize full ownership of the wreck by France. Le Griffon, built by the French explorer Cavelier de la Salle, was lost in Lake Michigan in 1679. In 2009, following negotiations, the State of Michigan bowed to the arguments presented by France and recognised its rights over the wreck.

Demand in terms of the training of specialists in underwater archaeology is immense. Many countries are expressing their wish to safeguard and evaluate their submerged maritime heritage. France, whose pioneering role in the matter is recognised by all, is constantly approached. “We recently received a major delegation from mainland China. We have also trained Chilean researchers for a year. A Taiwanese delegation arrived last week to initiate a training programme. Our aim is to create, by 2013, an international training centre in undersea archaeology,” says Michel L’Hour.

The ship, the Archéonaute, companion to several generations of undersea archaeologists, will soon be replaced by a new ship, better fitted out to meet new challenges and to deal with the exploration of deep-sea areas. Named the André Malraux, it is due to launch in 2012.