Home > French presence in the US Southeast > Honored French citizens > Martine Roussel, A woman commited to children and science

Martine Roussel, A woman commited to children and science 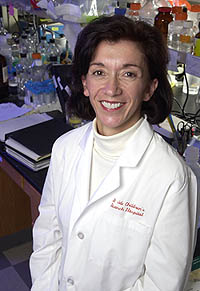 Martine Roussel is a passionate woman. Without a minute to catch her breath, she goes on at a frantic pace from cancer research to participating in associations in Franco-American scientific cooperation to numerous and surprising hobbies.

Taking a few minutes off from an overbooked schedule, she describes the roving life that led her to Memphis, Tennessee. After having lived in Africa during her childhood, Martine Roussel got a PhD in biochemistry from the University of Lille, in northern France. Immediately afterwards, she crossed the Atlantic to discover America, and joined the prestigious National Institute of Health in Washington D.C. In 1983, she decided to settle down for good in Memphis with her husband, and to work for the St. Jude Children’s Hospital.

This hospital, specialized in childhood cancers, is unique in the United States, in that it is totally free for its patients, and is solely financed by donations. It is nowadays a world-class organization, as Martine Roussel says, “At the beginning, St. Jude was small. Now, it is the second charity organization behind the Red Cross in terms of funds raised.”

Martine Roussel was persuaded to join the hospital by the humanitarian aspect of free health care, as well as the international fame of St. Jude’s cancer research, “I have plenty of reasons to feel happy when I wake up every morning. I enjoy extensive freedom to conduct my experiments, I have a cool and dynamic team, and I strive to find new therapies,” she confides.

But the charms of Memphis and Tennessee also had a great impact on keeping Martine Roussel in the Southeast for such a long time. “What I enjoy most in Memphis is the easygoing lifestyle. People are nice and friendly, there are plenty of things to do in the city— museums, the atmosphere, but also the lakes in Arkansas, just nearby. There’s really a wealth of things to do.” As a fan of blues, which made Memphis famous, and of the distinctive Southern lifestyle, Martine Roussel finds her balance in life amid this environment, where the Southern tranquility is mixed with the innate dynamism of this woman.

While she loves Tennessee, Martine Roussel maintains a lot of ties to France. She’s at the heart of scientific exchanges between France and the United States, which are both leaders in cancer research. As such, she participates in many scientific collaboration organizations in France, such as Eurocancer and Conticanet. She also manages an exchange program between St. Jude and the Paris VII University. As she loves both countries, Martine Roussel chose not to choose between the two, and to continue to enjoy “the freedom and the incomparable resources she has to conduct her research in the United States” and “the human-sized environment of France.” At her level, she contributes to increasing cooperation between the two countries, including on a local scale. As such, she participates in the “Memphis in May Celebration of France” event, during which she organizes a drawing contest.

Indeed, her passion for research, which translated into important breakthroughs in cancer research, wasn’t sufficient to fill Martine Roussel’s life. To channel her hyperactivity, she alternates calm and creative activities (15th-century style tapestry and gardening) and exercise to use her astonishing energy (bodybuilding).

Martine Roussel has a dual personality, peaceful and energetic, scientific with an artist’s touch, French and American. This duality unites and comes to life in Martine Roussel to form a happy woman of character, committed to fighting against cancer, for children and for science.