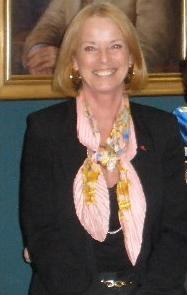 Corinne Gayard Mills, professor of French at Wando High School in Charleston, was officially appointed Honorary Consul of France in South Carolina on June 25, 2010. With this decision, the French authorities reassess the growing influence of the French community in Charleston.

This new title, Corinne Gayard Mills does not see it as a culmination and says, “Becoming Honorary Consul is an exceptional honor. It is an encouragement to continue along this path. This title should serve as a benchmark for the French newcomers, but also for Americans who want to engage in exchange with us.”

Corinne Mills Gayard already has a few projects in mind, particularly creating exchanges between schools. “Students from the School of Medicine of Lyon can spend a year in South Carolina. Students from here should be able to do the same in France,” says Corinne Mills Gayard, “for example, building upon the sister-cities, Charleston and the French town of La Rochelle. “By sending a young American student to Europe and a French student to the United States, each side opens up a new door.”

A native of Annecy, in Savoy, Corinne Mills Gayard arrived in Charleston in 1976 as an au pair, initially only for a few months. It is now 2010 and it is out of the question for her to leave South Carolina. At the time she joined her brother, Christopher, who embarked on a military career at the American school of Citadel. At the end of the World War II, their mother, who was 18 years old and inspired by the arrival of U.S. and Canadian troops, left the city of Limoges to work at the Canadian Embassy in Paris. Then she worked for the France-Canada Committee in Annecy, before presiding over the France-United States Committee. “This appeal of America comes from our mother. We were raised by the generation of French that were grateful to the American continent,” says the new Honorary Consul of France in South Carolina.

In 1979 Corinne Gayard Mills resumed her studies in the United States, specializing in French grammar, and then receiving a teaching certificate. When asked about the choice of this career path, she responded, “Gradually, when I spoke French I felt like... I was starting to have to search to find the words! Honestly, I got scared. I had to do something; I had to find a way to preserve my mother tongue, while continuing to immerse myself in American culture."Corinne Gayard then taught for twenty-two years at Bishop England High School before joining the Wando High School, a public school located in the beautiful Mount Pleasant with tall houses typical of the South. In fact, ask the Americans who have studied French in Charleston what was the name of their teacher and they’ll answer “Gayard Corinne Mills!”

For many years, Corinne Gayard Mills has also been a member of the Alliance Française of Charleston, where she is now Vice President in charge of coordinating the French courses, which are throughout the year and open to all. Together with Josette Sharwell, the committee also takes care of the French Film Festival, with the assistance of the American Association of French Teachers.

Passionate and inexhaustible, Gayard Corinne Mills is stuck on a particular topic—“the piece of paradise that is Charleston. Spared from the Civil War, easily visited on foot, Charleston is a city with a soul” she says. “In the first months of my arrival, when I felt a bit nostalgic, I would walk through downtown Charleston, and soon the relationship between Europe and the United States again seemed natural, even obvious.” With its Huguenot community, Charleston is also closely linked to France, and many names (Gayard, Porcher, Ravenet) are also reminders this relationship.

The mission of the new Honorary Consul has just begun. And more than ever, she has a smile on her face. “Vive la difference,” she concludes, giving an example — “For the first class of each year, I write a division table. Students are intrigued, they think they are attending the wrong class... But my goal is simple. This division, I do in the French way. Then I write the same thing in the American way. The result is similar, only different thinking to do so. It’s the whole purpose of what I want to teach them: appreciate the diversity available to us to clear an obstacle.”