The Office of Science and Technology in Atlanta 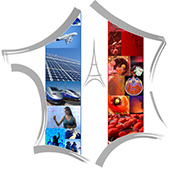 The Office for Science and Technology (OS&T) is headed by a Science Counselor, who reports to the Ambassador, with 8 attachés -all well recognized scientists or science policy specialists-, 10 deputy attachés, and staff. The OS&T also houses and works closely with the North America Representatives of the 3 French research agencies: CNES, CNRS, et INSERM, forming the Mission pour la Science et la Technologie (MS&T).

The OS&T works with the other sections of the Embassy: Culture, Economy and Trade, Nuclear, Environment, Chancellery … to better assess the socio-economic impact of science and technology in today USA.

Thanks to its wide territorial presence and wide range of science disciplines, the OS&T is an active, reactive and proactive observer of the scientific activity, of technological innovations and their impact. The OS&T has several branches located across the United States: main office in the French Embassy in Washington D.C., and within the French consulates in Atlanta, Boston, Chicago, Houston , San Francisco and Los Angeles.

The main goals of the Office for Science and Technology are:

The main mission of the Scientific Office—which covers Alabama, North Carolina, South Carolina, Georgia, Mississippi, Tennessee, Florida and Puerto Rico– is to promote scientific and technological dynamism through the development of structured partnerships between local institutions and public or private French institutions. Please visit the official website of the Mission pour la Science et la Technologie, Embassy of France in the United States, for more information.

Specialized in innovation and technology transfer services, Valérie Trentesaux brings to the table a solid background in industrial and academic research on both a national and international level.

Head of institutional relationships and member of the Executive Committee of Inserm Transfert – a private affiliate of the French National Institute for Health (INSERM) – from 2006 to 2015, she participated in a task force with the French Minister for Higher Education and Research which oversaw 1 billion euros dedicated to technology transfer under a program called “Investissements d’Avenir”. In close contact with scientists, she helped establish numerous partnerships between Inserm Transfert from private to public research agencies. She was also an active member of Covalliance, a French technology transfer life sciences committee.

From 1997 to 2006, Trentesaux worked at the Pasteur Institute in the Technology Transfer Department, where she was in charge of partnership agreements. In this capacity, she worked at the interface between industries, scientists and research agencies. Board member of the World AIDS Foundation (WAF) and the French and American Foundation (FAAF), she developed a partnership with the National Institute of Health (NIH).

From 1992 to 1997, she worked at Sanofi Diagnostics Pasteur, where she was in charge of its worldwide license agreements portfolio, gaining experience in the pharmaceutical industry and a greater enthusiasm for research.

Valerie Trentesaux holds a business degree from the Institute of Higher Education in Marketing and Commerce, ISTEC- Paris.

After Graduating from Edinburgh Napier University in a Bachelor of Environmental Biology and from Lyon University in a Master of Environmental Sciences and Industrial Risks, Jordan Peyret began his career working at SOCOTEC, a control office within the contaminated sites and soil department in Lyon. In 2015, he joined the engineering cabinet Artelia in the department in charge of the evaluation of environmental and social impacts from international development projects.

Please note that we are not in charge of the recruitment. We invite you to consult the web site of the Ministry of Foreign and European Affairs.