Home > French presence in the US Southeast > Honored French citizens > Elisabeth Bacon, bestowed Chevalier in the order of "Merite (...)

Elisabeth Bacon, bestowed Chevalier in the order of "Merite Agricole" 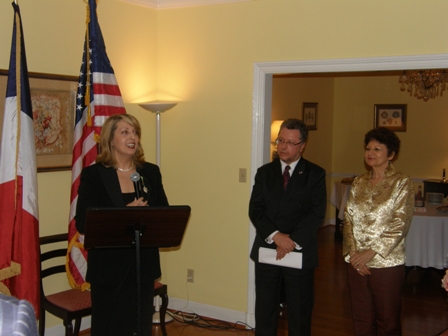 Mrs Elisabeth Bacon, CEO of the company “Il Vino Imports” was bestowed upon on October 12, 2009 by the Consul General of France in Atlanta, Pascal Le Deunff, the Award of Chevalier dans l’Ordre du Mérite agricole.

This Order was created in France in 1883 to reward services rendered by individuals who, by their actions, have benefited the French agriculture and products.

Throughout her career, Mrs. Bacon managed to build bridges between French and American traditions, promoting small French producers on this competitive market, while educating American consumers and consolidating a growing niche for French products in the State of Georgia.