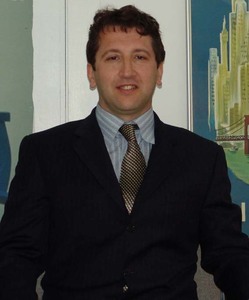 Chemist by trade, Romain Raina didn’t really have the profile to direct a travel agency. Leaving Manosque in 1992, he left to pursue his career as chief chemist in Montreal, and then in Miami. Nonetheless, an encounter, a passion and suddenly a new path appeared. In October 1997, Romain launched his own travel agency. in just a few short years, he managed to successfully break into the competitive and saturated travel market.

Romain Raina begins his expatriation as chemist in the city of Montreal. Several years later, he seized the opportunity to move to Miami but finds himself weary in a job that no longer fascinates him. It is in this cosmopolitan city that he met his future wife and in-laws. At the time he could not imagine the consequence of such a meeting. Captivated by traveling as him, his in-laws encourage him to open his own travel agency, which he will do in October 1997.

Romain launches his new venture: “Avenue Voyage”. Nevertheless, as he tells us: “This term was too overblown. I needed to find something that represent the people traveling, something more American”. He finally decides on Jet Setters Travel: “a multilingual, dynamic and catchy expression,” in Romain’s opinion.

Jet Setters Travel offers its services to companies and groups needing to organize trips from France to the US, or for French nationals traveling within the US, as is the case with the majority of the agencies of the French diplomatic network.

Six months after opening, he starts working with the French Trade Commission of New York. This first collaboration will open a number of doors for the new travel agency. As Romain clarifies for us: “Since 2003, we have been taking care of the French Ambassador’s plane tickets, and for seven years we have been working with consulates as in Atlanta”.

The American Southeast, with Georgia in the lead, turns out to be the next target for Romain Raina. The economic development of the region, embodied by the Atlanta airport, did not escape this entrepreneur’s mind. Romain Raina will be particularly busy with the Bio International Convention, worldwide conference on biotechnologies, which will be held in May in Atlanta. More than a hundred French companies will make the trip as well as many delegations representing various cities and regions of France. It was thus Romain who organized most of their trips… A significant opportunity for his agency that wishes to offer its services to big and midsize companies of the Southeast.

Just like its founder, Jet Setters Travel is an atypical travel agency that successfully broke into a competitive and saturated market. His secret: a subtle melding of French savoir-faire and American business sense. Now, it’s your turn to become a Jet Setter.