An opera in two acts presented by The Atlanta Opera, Silent Night will be performed at the Cobb Energy Center in Atlanta on November 5, 8, 11 & 13, 2016. 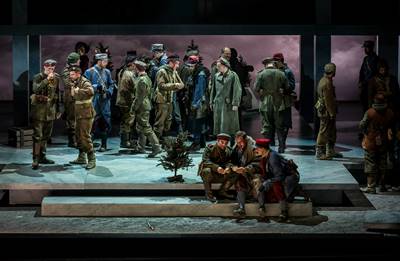 War movies often portray the conflicted nature of men involved in combat but few manage to capture the absurdity of armed conflicts as poetically as the story of Silent Night. Created by composer Kevin Puts and librettist Mark Campbell, Silent Night is the powerful and true story of the spontaneous Christmas truce between French, Scottish and German soldiers during World War I. Based on the 2005 French film Joyeux Noël and winner of the 212 Pulitzer Prize for Music, The Atlanta Opera’s newest production is directed by General & Artistic Director Tomer Zvulun.

On Christmas Eve 1914, the opposing forces put down their weapons to come together around a makeshift tree and play soccer matches. The soldiers’ peaceful actions are reprimanded by their commanders, but cast a lasting light on the good of humanity in the face of war (Run time: approx. 2 hrs + 1 intermission // Sung in English, French, and German with English Supertitles).

Tickets are available at The Atlanta Opera. Use promo code PEACEFUL40 to get 40% off any seat, for any performance of Silent Night!