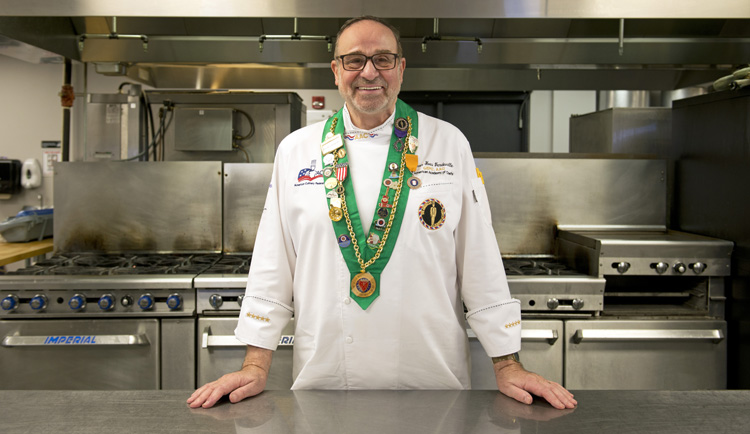 The French Consulate General in Atlanta is happy to announce that Jean-Yves Vendeville, the department head of the Cullinary Institute at Savannah Technical College, is now also the honorary consul of France in Savannah.

Vendeville takes up his new responsibilities as honorary consul having already helped promote something very French throughout the U.S. Southeast for years – good food!

Under Vendeville, who took over the STC program in 2008, students have learned about culinary arts while enrollment in the program has more than doubled. He also created a baking and pastry program for the state of Georgia. For projects such as these, the American Culinary Federation named him the top educator in the U.S. in 2014.

But that is hardly where Vendeville’s accolades end. In 2012 Vendeville received Georgia’s prestigious Rick Perkins Award, which honors the state’s most outstanding technical instructors. And in 2017 France bestowed him the title of Knight of the Order of the French Academic Palms

Vendeville also helped Savannah Technical College establish a new partnership with the Lycée des Métiers Lautréamont, a technical school in Tarbes, France — a first of its kind between a French and an American technical school — under which students trained in each other’s country for four weeks.

For Vendeville, his love for cuisine came early in life. His parents sent him to work with the pâtissier of his natal town of Libercourt when he was 14 years old, and from there, he never stopped loving the profession.

“I started working as an apprentice, I liked it, and I never looked back, I just kept going with it,” Vendeville said. His pursuit of a career as a chef led him to the hotel industry, where he worked for the Four Seasons and Ritz-Carlton. This industry gave him the opportunity to travel and to experience life in places as diverse as West Africa, the Caribbean, and Canada. It was while working in Canada that he moved from being strictly a chef into a more instructional role, teaching at George Brown College, where he recognized not only his passion for teaching but also met his American wife.

Despite having lived in so many different places, the decision to come to the Southeastern United States wasn’t a difficult one. Vendeville explains how he found himself in Savannah with a laugh, “My wife had had enough of cold winters, so when the opportunity to move to Georgia came up, I took it!”