To Chamblee locals, family man and entrepreneur, Robert Reeb, has done more than well in spreading his love for sweets. Customers cannot get enough of his hand-crafted and decorated truffles, pastries, and chocolates. 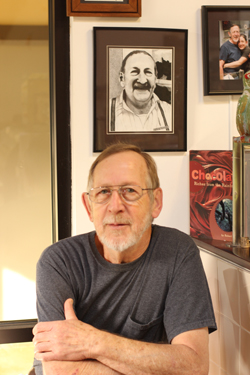 Robert Reeb, with his father and daughter pictured in the background

What makes these confections so delectable? For some, it may be the cocoa or sugar, but for Maison Robert customers, family is the most important ingredient. As a third generation confectioner, Robert began the art with a three-year apprenticeship under his father in his native home of Metz, France and refined his craft in Switzerland. From these experiences, Robert fostered his talent and passion and has since carried on the family tradition.

“I am happy that the French artisanal craft continues and that I am able to pass on the savoir-faire français.”

While in Switzerland, Robert met his wife, Patricia, a French major from Mississippi, in the hotel where they both worked. They later married and settled in Côte d’Azur and had two children. Recognizing the potential of the business, Patricia’s family encouraged the couple to move to the States to live the American Dream. With stars in their eyes the Reeb family moved from France to Houston, then Kansas City, and eventually settled in Atlanta to start their own shop in 1977.

“My wife would knit behind the cash register to pass the time,” Robert chuckled, recollecting the slow first week open.

Within a week the shop had exploded with customers, forcing Robert to hire help. Maison Robert did not close its doors for 3 consecutive years, leaving little time in the early years to return home to France to reconnect with family.

After serving breakfast, lunch, and dinner and catering for Delta Airlines and the Atlanta Braves for several years, Robert decided to downsize the business and pursue his true passion: making chocolate. Although the menu is smaller, the business continues to do well, requiring little to no budget for marketing. Each day, Robert hand makes about 1,800-1,900 chocolates with fresh, high quality ingredients, alongside his wife and daughter, Katia, the new shop owner. Their dark chocolate truffles and hazelnut bûchettes remain local favorites, though Robert insists that the health benefits boasted of dark chocolate is just “brainwashing”. 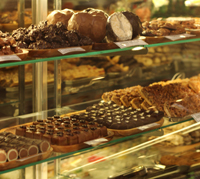 In his free time, socializing is of little interest to the hard-working maître chocolatier who continues his appreciation for hands-on work by spending time outdoors with his son. Together, they have hiked all the U.S. National parks, except Yellowstone. They have also hiked in the Pyrenees and Mont Blanc. In addition to the great exercise and the breath-taking views, Robert enjoys meeting hikers from all over the world. In the future, he’d like to try heading east, from Acadia to Quebec.

Robert recognizes that he may have had it easier than other French entrepreneurs seeking to settle in the U.S. Thoughtful, quiet natured, and a bit of a jokester, he’s all business when it comes to thinking of the future, both for himself and his family. When considering others who may desire to follow in his footsteps, this Frenchman, who has spent more than half of his life in America, is quick to offer a piece of almost paternal advice from La Maison Robert: “Know your profession. You have to love your profession and accept that there will not be five weeks of vacation. You have to be patient and everything will work out. If you accept these little details, you will have a successful future.”