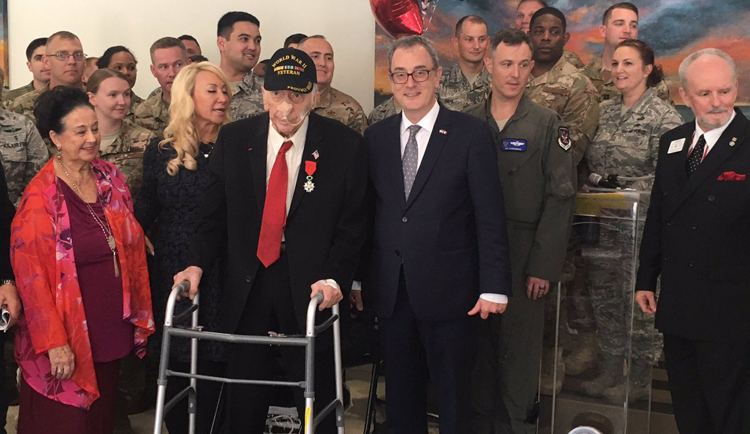 The Consulate General of France in Atlanta remembers and honors WWII veteran George Aigen of Valdosta, Ga., who received the Legion of Honor, the country’s highest merit, on April 11 before passing away exactly two weeks later.

Aigen was drafted into the U.S. Army in 1944 and trained at Camp Chaffee in Arkansas. He was assigned to Company B of the 1269th Combat Engineer Battalion, arriving in Europe by way of France. While in France he participated in battles in the French Alps and at Fontainebleau. He otherwise saw action in Central Europe and the Rhineland, spending more than 180 straight days in the combat zone. He was one of the first troops to enter Munich and among the first soldiers to liberate the Dachau concentration camp. In later years Aigen, who was himself Jewish, would share his war experiences with young listeners, keeping the memory of what happened during WWII alive.

The Legion of Honor is bestowed on French citizens as well as foreign nationals who have served France or the ideals it upholds, including individuals who have contributed to the country professionally, as well as veterans such as the Americans who risked their lives during World War II fighting on French soil.

Some of the best-known American recipients of the Legion of Honor include generals Dwight D. Eisenhower and Douglas MacArthur, and, as an institution, the United States Military Academy at West Point.