Home > Presentation of the National Order of Merit to Lionel Zadje

Presentation of the National Order of Merit to Lionel Zadje [fr] 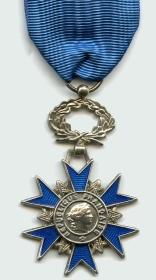 The Consul General Denis Barbet will present the National Order of Merit to Mr. Lionel Zadje, President of the Southeastern Chapter of the French Foreign Trade Advisors, during a ceremony that will be held at the French Residence on August 10, 2016.

Created in 1963 by President Charles de Gaulle, the National Order of Merit rewards distinguished service, civil or military, to France. This is the second highest award that can be given behind the Legion of Honor.

Lionel Zadje will receive this distinction in recognition of his exceptional service to France. Businessman based in the United States, he has carried out numerous missions in France and abroad acting as executive of SAGEM-Morpho (secured documents – Safran Group), then as one of the principal directors of the group VITEC United States, where he was the General Director for all operations in the United States as well as the Vice President of Sales and Marketing. In his day-to-day life, Lionel Zadje seeks to enhance the VIE International Internship Progam : he regularly hires from the program and recommends it to French companies operating in the United States.

Lionel Zadje is equally engaged in service to the French business community in Atlanta. Since 2010, he has served as president of the Southeastern branch of the National Committee of French Foreign Trade Advisors, reinforcing their advisory role to French authorities through regularly meeting with the Consul General and Business France. Finally, he actively supported « France Atlanta » during its création in 2010, and continues to support it today.