Home > French presence in the US Southeast > Honored French citizens > Patrick Terrail, or the writing of a quality life

Patrick Terrail, or the writing of a quality life [fr]

Publisher, author, restaurant owner, consultant, husband and father—Patrick Terrail’s resume reads like a movie script. In the 56 years that he’s called America home—from New York to Palm Beach, Los Angeles to Atlanta –it may seem surprising that he would choose to settle more or less under the radar in the small town of Hogansville, Georgia, population 3000. But small does not mean boring, and Terrail has certainly found new creative outlets that afford him more time with his family without the stress. 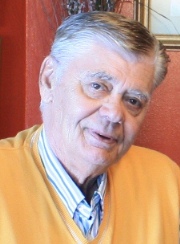 “I always wanted to deal with quality,” said the native Parisian in his now flawless English that hides his roots. Surrounded by an impressive private collection of Lichtensteins, Rauschebergs, Warhols, Gilots, and lesser-known artists in his deceptively modest Georgia home that he shares with his wife and 7-year-old-son, Terrail certainly has a taste for quality. Elegant, attentive, shrewd and pedagogical, he exudes the epitome of Old World meets new world with his impeccable understanding of the French culinary tradition, his surprisingly intimate knowledge of popular American culture and his Brooks-Brothers charm.

Following the family tradition of restaurant service—they own the infamous Tour d’Argent in Paris—Patrick Terrail arrived in New York in 1959 and studied hotel management at Cornell University, before opening one of the most iconic restaurants in Los Angeles of the 1970s and 80s: Ma Maison. Offering unparalleled service to the numerous high profile clients, Terrail cultivated a restaurant culture of superior quality which was lauded with awards such as the National Order of Merit-Agriculture and whose mythic stature still echoes in the annuals of pop culture 30 years after its closing.

« Back then, it was easy. You have a little savoir-faire. A French accent. They love that in the hotel business. That’s the story of Ma Maison. »

A daunting bout of cancer and the Atlanta Olympics led to Terrail’s eventual arrival in the Southeast, where met his wife, Jackie, in 1994. The two married and a tip from a friend led them to settle in Hogansville. “I like living here better than in Atlanta,” he affirmed.

In need of something to do, he opened a successful, high-end café in town, open just two days a week, followed by a restaurant and cooking school in nearby Newnan.

“We have too many mediocre restaurants, but the public has nothing to compare it to. We can’t belittle people for their lack of knowledge. We have to adapt to it. French food is not intimidating. It is our job to teach people. » As such, in the rural south, croissants became French rolls, quiche was called cheese pie, and what wouldn’t sell before, became a hot commodity that drew customers from afar.

From restaurants to writing

In need of a change, the move from restaurants to publication was happenchance.

“There were three newspapers when we arrived that focused more on negative news and didn’t dedicate enough coverage to local, ma-and-pa businesses.” Not a total stranger to the communication industry—he had hosted one of the first cable television food shows back when he and Julia Child were good friends– Terrail offered to buy a regular full page ad in the local paper, on the condition that he could publish unedited content. Unsurprisingly, that didn’t go over too well, so he met up with a friend in L.A. who had a paper of his own and got the scoop about what it would take to start and run the business. “When we got back, we put out an ad for an editor and a graphic designer.”

Twelve years later, 85 South—Out & About has gone from 4,000 to 50,000 copies, providing “positive coverage”, aimed to inform, entertain and support local communities along the I-85 South corridor from East Point to Columbus. 14 employees, including the original staff, contribute to the free monthly that also boasts an online edition and a radio talk show of the same name on Saturday mornings hosted by Terrail.

“You surround yourself with young people because you don’t always have the same vision. Maybe they’re smarter. I like to surround myself with people who don’t just say yes.” Even so, as founder and publisher, he has final say to all that’s printed– from promoting festivals to local restaurants, gardening advice to vacation hotspots. Best of all, every August issue is dedicated to France! Last year, the magazine highlighted the 70th Anniversary Commemorations of D-Day and the numerous cheeses of France; this year, there will undoubtedly be a piece on Bordeaux, as that is on the itinerary for the Terrail family summer break.

“We share our lives in the paper. You could say that it’s reality TV in print.”

Terrail’s interest in bringing out the best of the community in his magazine translates as well in his community investment. From loaning artwork to local galleries from his collection, such as the Francoise Gilot exhibit at the LaGrange Art Museum in 2011, to speaking to future study abroad students at LaGrange College about French cuisine, to hosting 6-course French meals at his house as a fundraiser for the French Heritage Society or the Boys and Girls Club, he keeps busy and takes his responsibility quite seriously. 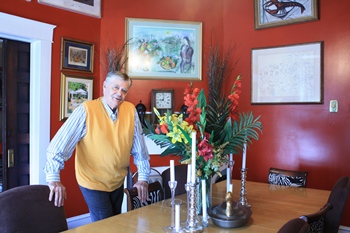 “We need for the French people here to become better ambassadors of our beautiful country.”

But perhaps, for Patrick Terrail, his greatest pride and accomplishment lies with his family. A devoted husband and father, known to leave warm messages in the lunchboxes he prepares, Terrail remains committed to ensuring the transmission of his French culture, language, and heritage to his young son, Gabe. In addition to annual trips to their summer home in LaNapoule, France, he dreams of bigger, more lasting adventures and discoveries for the boy, like perhaps a trip around the world when he’s older. Given the value that Patrick Terrail places on quality in work, there is no doubt that young Gabe will receive the absolute best that his papa has to offer.