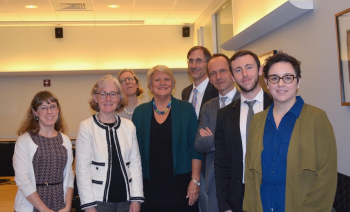 On December 10, representatives of the Office for Science and Technology visited the University of North Carolina at Chapel Hill to meet with the new Vice Provost for Global Affairs, Barbara Stephenson, as well as various individuals in charge of international liaison. The next day, they went to Duke University to meet with the Director of the Duke Center for International and Global Studies, Giovani Zanalda, and former Ambassador Patrick Duddy, Director of the Center for Latin American and Caribbean Studies. They also met with several researchers already collaborating with France and who are interested in developing these collaborations. Finally, this exploratory mission ended with a visit to North Carolina State University (NCSU) and a discussion with David Dixon, Director of Global Partnerships.

These three visits were an excellent opportunity to speak with the individuals in charge of global affairs at each university, and present the exchange programs funded by the French Embassy as well as future cooperation projects that might be of interest.

Of the projects presented, two projects elicited the most interested from the three universities: the FAID on biodiversity in Atlanta in late 2020 and the possibility of organizing a FAID on the theme of health and linked with the Research Triangle. The FAID is a conference organized by the Office for Science and Technology of the Embassy of France in the United States. Its objective is to bring together high-level French and American experts on an innovative theme in order to foster scientific, technological and industrial links between France and the United States and to promote French scientific excellence.

Xavier Bressaud and Pierre Gourjon warmly thank these three universities for the productive meetings, which provided an opportunity to meet those individuals interested in future collaborations with France in various scientific fields. The objective now is to support and develop these projects in the coming months.