November 29, 2010: France-Atlanta Opening Ceremony at the World of Coca-Cola

Taking place between November 29 and December 12, "France-Atlanta" is a french-american celebration dedicated to innovation. Co-presented by the Consulate General of France in Atlanta and the Georgia Institute of Technology, this project is organized under the High Auspices of the Ambassador of France to the United States, the Governor of Georgia, and the Mayor of Atlanta, with the support of all French and French-American organizations in Atlanta. “France-Atlanta” is designed to develop long lasting partnerships between France and the American Southeast, in scientific, business, artistic and humanitarian fields. “Innovation” is the driving force of this project. 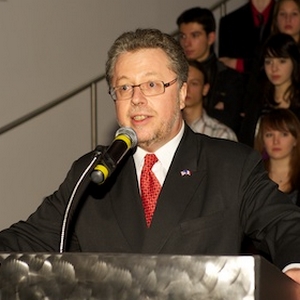 It is a great pleasure and an immense honour to welcome you all tonight to officially open “France-Atlanta: Together Towards Innovation”.

When I arrived in Georgia, 15 months ago, “France-Atlanta” was just a dream, a crazy idea. Today, thanks to you all, it is a reality.

1-Taking place between November 29 and December 12, “France-Atlanta” is a French-American celebration dedicated to innovation.

Co-presented by the Consulate General of France in Atlanta and the Georgia Institute of Technology, “France-Atlanta” is organized under the High Auspices of the Ambassador of France to the United States, the Governor of Georgia, and the Mayor of Atlanta, with the support of all French and French-American organizations in Atlanta.

While celebrating the 20th Anniversary of Georgia Tech Lorraine, “France-Atlanta” is designed to develop long lasting partnerships between France and the American Southeast, in scientific, business, artistic and humanitarian fields. “Innovation” is the driving force of this project, as “France-Atlanta” greets visionary talents.

For two weeks, the people of the Southeast, Georgia and Atlanta will be given the opportunity to experience over 20 events. This is the program of “France-Atlanta”:

- Atlanta will host the official signing of an agreement creating the Lafayette Institute—a partner institute of Georgia Tech Lorraine dedicated to entrepreneurship in optoelectronics.

- Four business workshops will bring together American and French economic experts and entrepreneurs, presenting business opportunities in the sectors of renewable energy, transportation & logistics, medical equipment and workforce management. These will be complemented by a presentation on France’s attractiveness, particularly highlighting the Lorraine region, to potential investors.

- Most of artistic disciplines - dance, theatre, music, and architecture – will be showcased during “France-Atlanta”, including a conference on the urban development projects “Atlanta Beltline” and “Le Grand-Paris”; a jazz concert with famous French artist Baptiste Trotignon; concerts by the Toulouse chamber choir “Les Eléments”; as well as a lecture by Laurent Le Bon, the Director of the new Centre Pompidou-Metz.

- Finally, two events will focus on humanitarian efforts—one on the current situation in Haiti following the earthquake devastation, and another on the new partnership between the Carter Center and the French Ministry of Foreign and European Affairs.

2- At the French Consulate, we are proud to work with our local American partners, who strongly supported us to bring such a diverse international initiative. In fact, I think that this unique program would not have been possible anywhere else in the world, as France has many friends in this region:

- First, the State of Georgia and the City of Atlanta: I would like to extend my deep personal appreciation to Governor Perdue and Mayor Kasim Reed for their strong support to this initiative.

- Also, Georgia Tech: President Peterson, I am thanking you profoundly for getting personally involved in this project and for the support, dedication and professionalism of all your colleagues at Georgia Tech.

- I would also like to thank Emory University, the CDC, Saint Joseph’s Hospital, the Georgia Department of Economic Development, The Georgia Tech College of Management-CIBER, the Metro Atlanta Chamber, Spivey Hall, the Rialto Center, the High Museum of Art, the Woodruff Arts Center, Morehouse College, St. Philips Cathedral, CARE and the Carter Center, for helping us in organizing particular events in the framework of “France-Atlanta”.

3- Nearly one hundred prominent French figures have crossed the Atlantic to join us in Atlanta for “France-Atlanta 2010”, including the Vice-President of the Lorraine region the Vice-President of the Conseil général de la Moselle, the President of Metz Métropole, the Mayor of Metz and a delegation from the City of Toulouse. They came to Atlanta with top scientists, business leaders, artists and NGO leaders. Tonight, I would like to salute them. A vous tous, amis lorrains et toulousains, merci beaucoup d’être venus et d’apporter votre soutien à “France-Atlanta”.

4- On the French side, I would also like to thank Cultures France, the Paris Chamber of Commerce and Industry, the MEDEF and several departments of the French Embassy in Washington, D.C.: the Cultural Services, The Science and Technology Mission, the Economic Department, the Office of the Counsellor for Sustainable Development and Transportation, the Press and Communication Service and the Advisor for Non-Governmental Cooperation and Civil Affairs.

5- I am also very grateful to the French and the French-American communities in Atlanta: Alliance Française, Association Ensemble, Atlanta-Accueil, Atlanta-Toulouse Sister Cities Committee, Ecole du Samedi, ERAI, the French-American Chamber of Commerce, the French Society, the French Heritage Society, the Senior Trade Advisors Association, Théatre du Rêve and Ubifrance. Dear friends from these organizations, you have all been involved in this project since the very beginning. Look at what you did! “France-Atlanta” demonstrates that when we are working together in the same direction, supporting each other, we can accomplish great results and enter into solid partnerships with our American friends.

6- Our very special thanks, however, must go to the “Dream Team” of the Consulate General of France in Atlanta. These are the one who, together with their French and American partners, really made “France-Atlanta” a reality: Etienne Abobi, Deputy Consul, who helped me so much over the past few months; Carole Scipion, Cultural Attaché; Jacqueline Signorini, Scientific and University Attaché; Claire Collobert, Press Attaché; and Brittany Kraft. With them, we look forward to the success of France-Atlanta 2010. Please give them a big round of applause.

“France-Atlanta” is not a show off. We mean business and we are talking substance: France wishes to develop solid and long term partnerships with you in all areas of activities. The presence of important French delegations tonight demonstrates this. “France-Atlanta” must be, in particular, an excellent opportunity to strengthen relations between Georgia and Lorraine, and between Toulouse and Atlanta. Thank you very much!

Speech of Dr. G.P. "Bud" Peterson, President of the Georgia Institute of Technology: 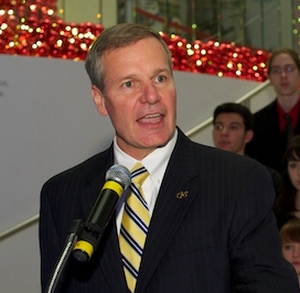 Bonjour. On behalf of Georgia Tech, welcome to this opening ceremony of what we anticipate will be an exciting two weeks of events spanning business, science, humanitarian efforts and cultural expression to celebrate and further enhance the many ways we in Atlanta link with France. We are especially honored to host 9 of the 20 events on the Georgia Tech campus. We’ll have everything from Innovation in Diplomacy to Photonics, Nanotechnology and Applied Robotics.

The events of these next two weeks are about increasing awareness, building bridges, increasing collaboration, and celebrating our cultures. The idea came from a conversation last year between Consul General Pascal LeDeunff and Yves Berthelot, vice provost at Georgia Tech and president of Georgia Tech Lorraine, located in Metz, France. Yves explained that Tech would be celebrating the 20th anniversary of Georgia Tech Lorraine this year in France and Atlanta. The Consul General said that we must have a special event in Atlanta, and the idea grew to a full blownFrance-Atlanta celebration.

The Georgia Tech-Lorraine campus offers students from around the world the opportunity to take undergraduate and graduate courses taught in English by Georgia Tech faculty.

In the past 20 years, more than 2,500 students have participated in the Georgia Tech Lorraine program. Almost all of them have studied both in France and on our Atlanta campus, and they represent 25 nationalities. When they graduate, they not only have a degree from a top research university; they also have experience learning, working and living alongside some of the best and the brightest students from throughout the world, and are uniquely prepared for success in an increasingly global environment.

Georgia Tech Lorraine was Georgia Tech’s first international campus, and we are proud to say that it is a unique model that has been studied by many other institutions. We have since added international programs in Singapore and Ireland, and dual degree programs in China, Germany, Great Britain, Italy, Korea, South Africa and Mexico.

While it is not a requirement, almost 40% of Tech’s undergraduate students have an international experience before they graduate. Students who study in Europe generally go to class four days a week, and spend long weekends traveling. GT Lorraine students have been known to get off the train on Monday morning and go straight to class!

Another benefit of Georgia Tech Lorraine is the opportunity it presents for business, industry and government from both countries to work together to take advantage of mutually beneficial opportunities, such as the Lafayette Institute. We will sign the official agreement to create Lafayette Institute tomorrow. It will serve as a significant resource for research and development, technology transfer and commercialization.

Many of the problems we face today are “global” in nature, impacting all of humanity – things like energy, climate change, water utilization and resources and health care. It is therefore only fitting that we utilize global resources and develop global solutions to the problems.

A global perspective is one of the five main goals in Tech’s new 25-year strategic plan. The goal is to “Expand our global footprint and influence so that we are graduating good global citizens.” We plan to do that by expanding the world’s footprint at Tech, extending and leveraging Tech’s impact around the globe and embracing and supporting globally engaged students.

The France Atlanta activities align perfectly with Tech’s strategic goals. Not only are we able to provide new opportunities of engagement for Tech’s faculty, staff and students, but we’re opening our doors to the Atlanta community.We look forward to engaging experts from Atlanta and France to explore new solutions and possibilities, as well as celebrating the best of our cultures.

I hope many of you will take full advantage of the rich opportunities of this series of events. We are honored to partner with the French Embassy, the city of Atlanta and numerous civic organizations, and look forward to welcoming you to our campus.

Before you come to campus, we would like to offer you a preview. Each year, universities produce public service announcements to play on television during sporting events. The public service announcement we produced this year features a fourth-year Architecture student at Tech, Caity Jimenez, jamming with Shimon, the robotic marimba player from the Georgia Tech Center for Music Technology.

On behalf of the almost ten million citizens of the State of Georgia, Mary and I are extremely pleased to welcome you to this celebration marking the start of the “France Atlanta” program.

At the outset, I want to recognize the leadership of the Consul General of France, Dr. Pascal Le Deunff, without whom none of this would be possible. France Atlanta owes its success directly to him and his vision to strengthen the solid bonds that bind the State of Georgia with the French Republic. I commend him and thank the French government for its continued investment in a consulate here in our capital city.

Over the ensuing days, you will participate in an ambitious program highlighting the educational, cultural, commercial, scientific, political, and philanthropic links between our two parts of the world. You will discover how much we already share and how much we are already connected. More critically, you will learn of the bountiful opportunities that exist for further collaboration… collaboration that will be of mutual benefit to the citizens on both sides of the Atlantic Ocean.

I know that this event will serve as the springboard for countless future ventures. My hope is that they will be as successful as the relationship between Georgia and France.