Following the horrific attacks that struck Paris on November 13, 2015, the U.S. Southeast joined with the rest of the world in expressing its grief and solidarity. 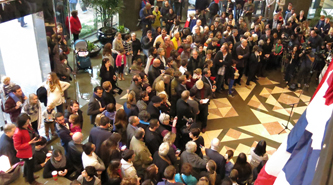 “We cannot express enough our appreciation to our American friends for their support in this difficult time,” said Consul General Denis Barbet.

The Consulate and honorary consuls received several messages of solidarity from American friends and supporters. Many members of the community in Atlanta and Nashville signed books of condolences, including Mrs. Sandra Deal, wife of the Georgia Governor. Others left flowers, messages, or candles at the foot of the French flag, which flew at half-mast at the consulate for days following the attacks.

Several cities paid homage to the victims, holding flag ceremonies, minutes of silence, or lighting official buildings with the tricolors of the Republic of France.

Sporting events also showed their support, playing the Marseillaise or honoring the French flag at the Nashville Predators hockey game, the Atlanta Hawks basketball game or the University of Southern Mississippi football game. 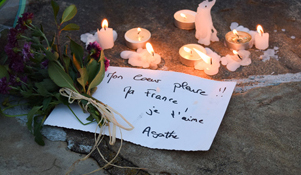 And still others, in anticipation of the medical expenses of the hundreds injured in Paris, have organized benefit concerts, such as SOS4Paris, and other fundraisers destined to raise money for the French Red Cross.

“We wanted to send a message of solidarity to our friends in France,” said Atlanta City Council President Ceasar Mitchell following the minute of silence that was held at Atlanta City Hall on November 16. “We stand against violence in all of its forms and we support the French community residing here or visiting.”

To view other photos from the U.S. Southeast, visit our flickr page.