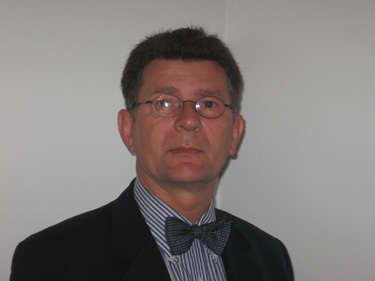 Nicolas Brindel is the bilingual French School of South Carolina’s Director. He has been living and working in the U.S. for more than 20 years, and because of his long-time commitment to education he was bestowed Chevalier dans l’Ordre des Palmes Académiques. It seems that his American fate was decided at the age of 19, when he first visited the U.S. for summer vacation: he realized then that the U.S. society and its social exchanges suited him perfectly.

Consequently, in 1984 when this “Parisian through-and-through” was offered a job in New York City, he accepted the position without hesitation. Little did he know that he would stay for 11 years! After studying in Paris to get an Associate’s degree in Law and Economic Sciences and a Master’s degree in English, he was hired as Director’s Assistant at the French-American School of New-York. His education and his family made him a perfect fit for the bilingual school system: fluent in English since middle school, in part thanks to countless trips in the UK, he is also familiar with schools and their environments. This knowledge of the educative world is only natural, being the son of a school director and having plenty of experience as a school supervisor and visiting teacher.

Coming back to Paris in 1995 to fulfill his dream of family, he remained true to his multicultural identity acquired in the U.S.: he worked for the Ecole active bilingue Jeannine Manuel where he was in charge of high school level and the International Baccalaureate. His first American experience was a revelation, as he confirmed what he always knew: he was born to work on the education field, which is the most fulfilling profession for him. “As a teenager, I debated for a long time between a diplomatic career, journalism or education. However, I knew that education was the field where I could blossom and live through my deepest beliefs, like humanism, working for the children, and the feeling that education is the key for tomorrow’s society” said Nicolas Brindel.

After his five-year stay in Paris his calling to go back to the U.S. was too strong, and he and his family arrived in Massachusetts in 2000, at the International School of Boston. “After eight long and cold winters in Boston!” he was hired in 2008, at the bilingual French School of South Carolina in Greenville, to become its director. Delighted by the South’s warm weather and people’s pleasant manners, Nicolas Brindel is thrilled with his new job: according to him, the Michelin School is the ideal school to work at. According to the director, it is a “small school of 70 people, the Michelin School is a place where children can blossom and where professors work in the best environment. Generally, students enrolled at the Michelin School stay there for two or three years, and an average classroom is usually only three or four students and a professor. This organization helps the students to feel enthusiastic about learning and allows a fruitful dialogue among students and professors.”

Nicolas Brindel has been living here for 25 years, and it is a constant joy for him to be a Frenchman integrated in the U.S. society. He is still willing to go forward, be it as Michelin School’s Director or personally. Regarding his school, he hopes to continue improving the quality French education it is offering, in order to allow French children to go back to the French system without any difficulty. As for him and his family, Nicolas Brindel can envision them staying for a very long time in Greenville. Actually, as long as he stays focused and composed thanks to his family and his mission in the education field, this multicultural Frenchman could be found anywhere in the world, as long as he is still working to ensure our children’s future.