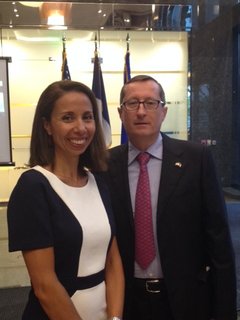 Soft spoken yet confident, it is easy to see that Nasera Souidi’s good-nature and attentiveness could command a room of 100 business leaders to a room of 20 kindergarteners - both with which she has had experience. As President of the International Business Council of Chattanooga,founder of the Chattanooga branch of the French American Chamber of Commerce, and a wife and mother to three boys, this native of Thionville, France has a lot to be proud of in her 13 years of residency in the US.

Souidi attributes her professional success to her parents, who immigrated from Algeria in the early 1960s.

“They taught my five brothers, two sisters and me that it isn’t good education alone that makes you successful, but a hard work ethic.”

A Self-proclaimed “nerd”, Nasera Souidi developed her passion for coding at a young age - when she discovered the computer in middle school. She enjoyed it so much that she studied Management Information Systems at the University of Lorraine. A go-getter by nature, she jumped at the opportunity to take a position with Cargolux Airlines in Luxembourg after graduating. It was a great opportunity that enabled her to not only use her degree, but to play a leadership role in a company. As a part of her professional responsibilities, Nasera Souidi had the opportunity to travel around the world: USA, England, Scotland, Ireland, Italy, Hong-Kong, Luxembourg, Spain, Lebanon and Egypt.

Meeting her American husband there was just a bonus that led to her inevitable path to the States. It was not only the idea of traveling that drew her to the US, but the career of her husband and her desire to find success in America’s business world.

First moving to Columbus, GA in 2002 for her husband’s job, she now works as a Project Management Office Manager and employs her information systems knowledge at BlueCross BlueShield in Chattanooga, TN, where she has lived since 2011. Souidi finds her professional success in corporate America, and the fact that she was able to establish a career in another country, very rewarding and enriching.

“It is very important to me to establish French connections in the community where I live, so when I moved to Columbus and then here to Chattanooga, my first steps were to reach out to French professors at the universities.” From there, she started meeting a group of French francophiles twice a month.

This was a major motivator in her decision to establish the French American Chamber of Commerce in Chattanooga. Her desire to be true to her French culture while keeping up with American culture has led to the success of the FACC, which has grown in number every year since its establishment.

“I have found the FACC to be a perfect balance of cultural influence and international business - two things I hold in high regard.” Her vision for the FACC is to be a liaison for bilateral French and American commercial development.

This outlook also led to her Presidency of the International Business Council of Chattanooga, where she focuses on understanding the business culture of different countries and ways to develop lasting business relationships as well as support the international community of Chattanooga. 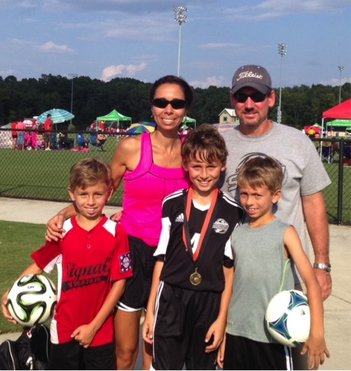 When Souidi is not attending a council meeting or hosting a conference, she is at one of her sons’ sports games, as they all play soccer, basketball, and baseball. One of her biggest challenges is keeping French influence in the house.

“I talk to them in French, and we go back to visit most every year.” She even used to host a French club at their school when they were younger.

“When they get to middle school, they get to pick between German, Spanish and French, and they know which language they will pick!”

When asked about what aspect of the French culture she misses most, Souidi took a second to think before responding. “I miss my family back home of course. I love my life here, but sometimes I feel like I am always on the go. I miss going into a French cafe, sitting in the corner with a coffee and just relaxing for a minute, and watching the world go by.”

Though this idea seems contradictory to the Nasera Soudi’s fast paced life in Chattanooga, she does not want to stop there. In the near future, she wants to go back to school to further her education and provide her the knowledge needed to implement future innovative and entrepreneurial ideas. To her, continuing to learn - whether in a school environment or simply from your surroundings - is the key to success, as it continues to open up doors to new and exciting opportunities.